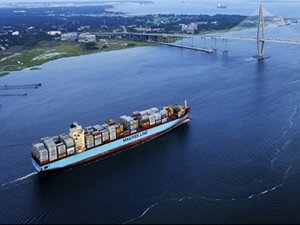 The port also reported that it is making significant progress on its expansion efforts designed to make Charleston the deepest port on the East Coast of the United States.

The Port of Charleston, South Carolina reported that it is beginning to see a recovery in volumes as it announced July results. The port also reported that it is making significant progress on its expansion efforts designed to make Charleston the deepest port on the East Coast of the United States.

While the port’s volumes remain down for the full year, they reported improvements in volume during July versus the prior month. Among the encouraging signs that port officials highlighted was the highest July on record for vehicle movement through the port. The strength in the ro-ro sector they believe signifies a return to normalcy at automotive plants throughout South Carolina and the Southeast. Additionally, while exports and imports were down overall, Asian imports moved upward in July. which they also believe points to a positive economic trend.

“We are encouraged by some signs of an initial rebound in our container and automotive volumes, as well as an increase in imports and a decline in blanked sailings,” S.C. Ports President and CEO Jim Newsome said. “However, a more substantial recovery is dependent on the duration and intensity of the economic impacts from the pandemic, and ultimately, on a vaccine. We are hopeful for a stronger rebound throughout fiscal year 2021.”

Another important sign according to S.C. Ports is a decline in blank sailings. They reported that five blank sailings remain on the schedule coming from Northern Europe. In total, the port has recorded 72 blank sailings since January.

Encouraged by the signs of recovery, the port is also preparing for its next phase of growth. At a recent press briefing, it outlined progress on the deepening project for Charleston harbor which is termed an integral part of the port’s infrastructure plan. Ten years in development, they reported that the dredging project has moved through planning, permitting, and is fully funded. The U.S. Army Corps of Engineers is preparing to let the last two contracts for the project.

The dredging project will deepen the harbor from its current 45-foot depth to 52 feet and is on time and on budget to be completed by 2022. The objective is to prepare the port to handle multiple big ships at one time. The officials expect ships to continue to increase in size and by making Charleston the East Coast’s deepest harbor the port will handle up to four 14,000 TEU vessels at one time. At that depth, the port will be prepared to handle any ship sailing today up to the large 19,000 TEU container ships.

The dredging project is part of an overall $2 billion modernization effort for the port of Charleston. Upgrades are also ongoing at Wando Welch Terminal while construction continues at the Hugh K. Leatherman Terminal in North Charleston that is expected to open in March 2021. Recently, retailing giant Walmart announced plans to invest $220 million into a new distribution center in the area which is expected to add five percent to the port’s volumes.

“From 2009-2018, we doubled our container volume. In 2019, we set record volumes nearly every month. The first two months of 2020 also saw record volumes before the pandemic disrupted businesses globally,” Newsome said. “I am confident that we will weather this uncertainty and come out stronger. We are a world-class port located in the booming Southeast market.”

This news is a total 2762 time has been read
Tags: Charleston Sees Recovery While Preparing to be Deepest East Coast Port