Charred remains of the X-Press Pearl sinking off Colombo 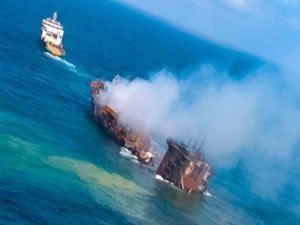 With white smoke still billowing from its foredeck, the 2,700 teu X-Press Pearl, not yet four months old, started to sink today in waters off Sri Lanka’s west coast.

Salvors had managed to attach a tow to the ship, and at the orders of the country’s president, had commenced to tow the fire-ravaged boxships to deeper waters today.

However, with the engine room flooded, the stern of the ship started to sink and towing efforts were cancelled.

On May 20, the Singapore-flagged X-Press Feeders vessel reported smoke from the cargo hold while at Colombo anchorage, which likely came from poorly packed nitric acid in one container mixing with other chemicals being carried onboard.

The next day the vessel reported fire on deck.

High winds from a monsoon fanned the flames and Sri Lanka has had to contend with a massive environmental catastrophe as many of the cargoes onboard, including tonnes of micoplastics, have washed up on the island’s shores.

The ship has some 278 tonnes of bunker fuel onboard.