Chavez in China for oil deal 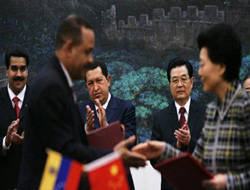 China and Venezuela inked a series of agreements on wide-ranging fields, a sign of bilateral efforts to advance their strategic partnership to a new high.

China and Venezuela on Wednesday inked a series of agreements on wide-ranging fields, a sign of bilateral efforts to advance their strategic partnership to a new high.

The agreements came out of the summit talks in the Great Hall of the People as Beijing rolled out the red carpet for Venezuelan President Hugo Chavez. The 12 new cooperative deals covered trade, oil, finance, education, justice, telecommunications, infrastructure, sports and cultural relics.

Chinese President Hu Jintao gave an honor guard reception to Chavez, who was on his fifth visit to China since taking office as Venezuelan president.

In their hour-long talks, Hu first thanked the Venezuelan government and people for providing relief to China following an 8.0-magnitude earthquake that devastated the southwestern China on May 12.

In response, Chavez said the Venezuelan people were sympathetic with the victims in the quake. He wished the Chinse government and people a speedy recovery from the disaster.

Stressing both China and Venezuela stayed at an important stage, Hu said the two countries shared the goal of stepping up substantive cooperation and seeking common prosperity.

To advance the bilateral strategic partnership, Hu proposed the two countries keep the high-level visits, enhance dialogues between the governments, legislatures and ruling parties, and exchange views on issues of common concern.

On the economic front, Hu said China would like to deepen "all-phase and integrated" oil cooperation with Venezuela, encourage businesses to invest in Venezuela and establish a trade zone.

Chave said Venezuela would like to work closely with China on stronger political ties, increased dialogues and more substantive cooperation in energy, finance, agriculture and machinery.

On international issues, Hu and Chavez agreed to step up communication and consultation in multi-lateral organizations and on global issues, so as to safeguard the reasonable rights of developing countries.

This news is a total 4587 time has been read