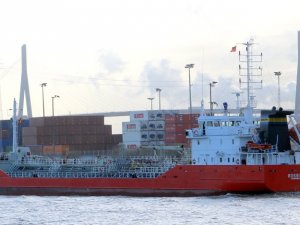 The chemical tanker Rossini stuck at sand embankment in Kiel Canal, after getting technical problem during eastbound transit.

The vessel was en route from Moerdijk to Wismar, but suffered damage of its fuel pipe and was emergency stopped at 59 km mark. the drifting tanker stuck at the northern embankment of the canal near Westerronfeld and blocked the traffic through Kiel Canal. The accident was reported to the local authorities and at the scene was dispatched salvage tug, which refloated the chemical tanker Rossini to safe depth. It was estimated that the vessel did not suffered serious damages and was released by the local authorities to proceed transit through the canal and was ordered to berth at Bominflot bunker quay for special survey and inspection.

The local authorities investigation the root cause of the accident. There were no injured people and no reported water pollution during the incident. The vessel was not breached and did not suffered water ingress, but traffic between Schulp and Schacht-Audorf was hampered during salvage operation, but there was no serious congestion.

This news is a total 1101 time has been read
Tags: Chemical tanker Rossini stuck at Kiel Canal and blocked traffic