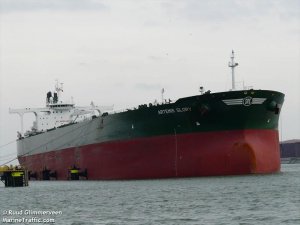 A Chevron Corp crude oil cargo has become embroiled in U.S. sanctions on shipping companies for violating restrictions on doing business with Venezuela, the company confirmed on Friday.

Adamant Maritime Ltd, owner of very large crude-oil carrier (VLCC) Seahero was sanctioned by the U.S. Department of Treasury on Tuesday for carrying a Venezuelan cargo in February. The vessel is heading to Asia after recently stopping in Trinidad and Tobago, according to vessel tracking data.

The tanker is on short-term charter and “performing a voyage that is not related to Venezuela,” Chevron spokesman Ray Fohr said. “We are working with the appropriate government agencies to ensure compliance with U.S. laws and regulations,” he said.

Chevron is the last U.S. oil producer operating in Venezuela.

It put the vessel on a six-month charter a week ago, prior to the sanctions, according to Refinitiv Eikon data.

Washington is considering imposing sanctions on dozens of additional foreign oil tankers for trading with Venezuela, a U.S. official confirmed on Friday.

Vessels that could be targeted included 25 supertankers, which can each carry a maximum of 2 million barrels of oil, and 17 smaller vessels, sources said.

The Treasury Department did not immediately respond to a request for comment.

The Seahero’s manager was listed as Greek company Thenamaris, according to shipping data and Thenamaris’ website. The Athens-based company did not immediately respond to a request for comment.

This news is a total 1337 time has been read
Tags: sanctions, trump administration, venezuela