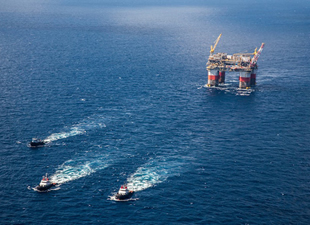 Chevron Corp. halted share buybacks, slowed work on new projects and announced the biggest spending cut in more than a decade as oil explorers around the world curtail ambitions to cope with free-falling oil prices.

Chevron lowered its 2015 capital-spending target by 13 percent to $35 billion and halted stock repurchases that absorbed $5 billion in cash last year. The San Ramon, California-based company reported a 30 percent drop in earnings from the year-ago period.

Chevron’s reduction is the most by dollar amount among more than $40 billion in spending cuts announced industry-wide since Nov. 1. Still, other producers have slashed on a bigger scale, with some cutting outlays by 50 percent or more. Chevron’s accountants are hamstrung by multi-billion dollar developments that are too close to completion to postpone.

“Chevron doesn’t have quite the flexibility of some other companies to cut spending in the near term because they are still finishing some mega-projects,” said Brian Youngberg, an analyst at Edward Jones & Co. in St. Louis. “Beyond 2015, their flexibility will improve.”

Oil explorers and the contractors that help them drill wells, build offshore platforms, lay pipelines and feed rig crews have been whiplashed by the seven-month rout of oil markets that saw the value of a barrel of crude shrink by 57 percent.

The industry has responded by cutting more than 30,000 jobs, halting exploration projects and deferring investments in everything from gas-export terminals to petrochemical plants.

The ripple effects from contraction in the $1.7 trillion-a- year oil industry is being felt across North America. The U.S. economy grew at a slower pace than expected in the fourth quarter as business investment cooled. Gross domestic product expanded at a 2.6 percent annualized rate after a 5 percent gain in the third quarter, according to the Commerce Department Friday. Economists’ forecasts had called for a 3 percent advance.

Even as demand falls for office space in oil hubs like Houston and Calgary, rock-bottom gasoline prices are goosing some economic activity because consumers have more cash to spend on non-fuel purchases.

American consumer confidence reached an 11-year high in January as a strengthening labor market and plunging gas prices kept households looking on the bright side. The University of Michigan final consumer sentiment index rose to 98.1, the highest since January 2004, from 93.6 in December.

The retrenchment by Chevron, the second-largest U.S. energy producer, followed the company’s weakest quarterly profit report since the global financial crisis half a decade ago. Net income in the final three months of 2014 dropped 30 percent to $3.47 billion, or $1.85 a share, from $4.93 billion, or $2.57, a year earlier, according to a company statement.

Chevron’s per-share result was 21 cents higher than the average of 20 analysts’ estimates compiled by Bloomberg.

Despite the steep fall in prices, “we believe long-term market fundamentals remain attractive,” Watson said in Friday’s statement. He said the company would seek to reduce its expenses “throughout our supply chain.”

Chevron’s budget cut announced Friday was its largest since 2003, when spending plunged 26 percent and crude prices were half their current levels.

The majority of Chevron’s spending this year will go toward supporting existing production, including decades-old fields in California and Texas, and projects under construction, such as its Gorgon natural gas project in Australia. Chevron said that spending will account for $26 billion of the planned $35 billion budget, with $3 billion aimed at exploration.

All projects, particularly shale assets, will be tested for profitability against current market prices, with Chevron “selecting only the most attractive opportunities to move forward,” Watson said.

In December, Chevron inaugurated production from the Jack/St. Malo deep-sea development in the Gulf of Mexico, a $7.5 billion venture that is expected to pump oil and natural gas for four decades. Earlier this week, the company agreed to take control and buy stakes in two Gulf discoveries and a nearby exploration prospect from BP Plc for an undisclosed price.

Watson has said he wants to boost Chevron’s worldwide output by more than 20 percent by the end of 2017. The company has slated about $150 billion in new oil and gas installations both on land and at sea to meet that goal.

That goal could be harder to reach with spending constrained by the market crash.

“I’m assuming their production doesn’t grow this year,” Youngberg said. “The growth outlook will need to be scaled back.”

Also Friday, Chevron said it was abandoning natural gas exploration in Poland’s shale formations, joining at least four other international energy producers, including Exxon Mobil Corp., that quit the nation because of disappointing results. The departure deals another blow to Poland’s ambition to join the shale revolution and help free itself and its central and eastern European neighbors from dependency on Russian gas supplies.

U.S. natural gas averaged $3.83 per million British thermal units during the quarter, little changed from the $3.85 average of the year-earlier period.

–With assistance from Jim Polson and Phil Kuntz in New York, Victoria Stilwell in Washington, Hui-yong Yu in Seattle and Katia Dmitrieva in Toronto.

This news is a total 1475 time has been read
Tags: Chevron, last year, San Ramon, California