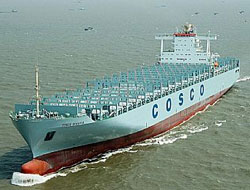 Container lines ?will still be under pressure in the second half as rates won"t cover costs,? said Johnson Leung, a Hong Kong-based analyst at Tufton Oceanic Ltd., the world"s largest shipping hedge-fund group. ?The rate increase for the peak season may only be sustainable for a couple of months.?

The shipping line"s losses from hauling commodities were larger than its container-shipping losses, once 6.7 billion yuan in gains from freight-forward agreements and net changes in provisions were stripped out, according to UBS AG.

?The quality of the result was much worse than we expected,? even if the net loss figure was in line with analysts" estimates, Damien Horth, a Hong Kong-based analyst for the bank, said in a note to clients today. ?This does not bode well for full-year estimates.?

The shipping line"s container fleet comprised 149 vessels as of June 30, with another 57 on order. It also operated 431 dry-bulk ships, with orders for 44 more. The company canceled eight commodity ships last month.

All 10 of the world"s largest listed container-shipping companies have posted losses this year, triggering industrywide efforts to raise rates through coordinated increases and capacity cuts.

UBS expects container rates to get stuck at just above a zero profit margin as anything more than this will persuade shipping lines to return idled vessels into service.

?This is now looking like a very optimistic scenario for China Cosco,? Horth said.

This news is a total 2039 time has been read