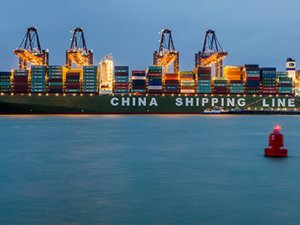 In 2008, Germany’s Port of Hamburg was still handling the most ‘China containers': 2.6 million against Rotterdam’s 2.2 million.

In 2008, Germany’s Port of Hamburg was still handling the most ‘China containers': 2.6 million against Rotterdam’s 2.2 million.

The German port suffered greatly during the crisis of 2009, said Castelein, whereas Rotterdam’s throughput only declined moderately.

Since then, Rotterdam has been the main European port for ‘China containers’, though the lead on Hamburg remains small. In 2013, Hamburg handled 2.3 million TEUs; Rotterdam handled 2.4 million. Anticipating the definitive figures, the Port of Rotterdam Authority expects an increase of at least 10% in 2014.

The Chinese share of Rotterdam’s throughput will be significant and likely to increase again in 2015, Castelein predicted.

There are currently 18 container services per week between Chinese ports and Rotterdam.

This news is a total 2063 time has been read
Tags: china, Container, europe, favours, News by topic, port, Rotterdam, SHIPPING, The Netherlands, Volume ECSA: Maritime-Specific Rescue and Recovery Plan Is Urgently NeededThe European Community Shipowners’ Association (ECSA) has welcomed the work done by the EU so far to support the shipping industry in dealing with COVID-19 but stressed that more sector-specific actions are needed to save the industry.