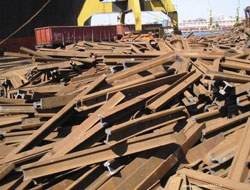 A top China steel industry official restated on Thursday strong opposition to settling iron ore prices at the same 33% cut other Asian mills have agreed, but said a deal could still be reached by month's end. "It's impossible for China to accept the 33% price (cut) ... You will see an outcome in around 10 days," Li Xiaowei, vice chairman of the China Iron and Steel Association (CISA) was quoted as saying by Dow Jones. "Supply and demand rely on each other like teeth and lips. Those who only chase monopoly and windfalls will eventually lose more," the report quoted Li as telling reporters on the sidelines of a local investment forum.

CISA was not immediately available for comment. Rio Tinto which has effectively led negotiations this year, has said it is ready to sell to its customers on whatever basis they prefer, using the established benchmark or the spot market. BHP Billiton has regularly declined to comment on talks.

The report comes amid growing uncertainty for investors and traders closely watching the global iron ore market and China's steel industry, which are already rattled by China's probe of Rio Tinto officials over spy allegations, plans to scrap some iron ore import licenses and an abrupt drop in Australia bookings.

Earlier this month, sources with knowledge of the situation told that some major Chinese steel mills had tacitly agreed to the 33% price cut but said there would would be no formal announcement. China, which surpassed Japan as the world's biggest seaborne ore customer in 2003, sought to get a better deal this year than Japan and South Korea had won by taking advantage of its position of consuming more than half the globally traded iron ore.

But its bargaining leverage has been sharply weakened by its record steel production, a rally in spot iron ore prices to eight-month highs -- well above the previously agreed benchmark -- and rapid steel output expansion elsewhere on recovery signs.

"I don't think Australian miners will concede on the 33% price cut, but there could be some compensation offered to China if they officially accept it," an iron ore sales manager at a state-owned trading house told.

China has balked at the 33% price reduction that Japan and South Korean mills have agreed, arguing that it wants a deeper 40-45% cut to take term prices back to 2007 levels. The marathon negotiations, which missed their June 30 deadline, took a fresh turn this month after China detained four sales officials of Rio Tinto over allegations of stealing state secrets during this year's iron ore talks.

The unprecedented negotiations have stoked more talk about the ultimate dismantling of the four-decades-old system and a move towards more market-based pricing, both through greater trade on the spot market and the use of index-linked contracts.

"There is something inherently wrong in the way iron ore prices are determined. There needs to be a rethink of the system," Western Australia Premier Colin Barnett told reporters also in Beijing.

This news is a total 2378 time has been read