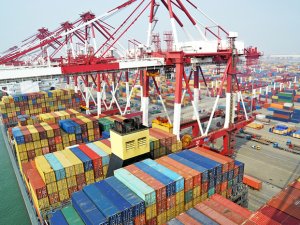 Hong Kong-Listed China Merchants Port Holdings reported an 86% surge in first-half net profit, thanks to a one-off gain and higher volume handled by the company's ports.

Net profit attributable to shareholders rose to HK$3.15 billion ($402.5 million) from HK$1.69 billion a year ago, the company said. Profit for core ports operation came in at HK$2.45 billion. Revenue for the period rose 5% to HK$4.05 billion.

"The economic indicators of the second quarter this year indicated continuous growth of economic activities around the world. In particular, although the growth of global trade and industrial production has slowed down from the high speed as at the end of 2016 and at the beginning of 2017," said a statement from the company.

"Looking into the second half of the year, the global economy will stay on the recovery trajectory, mainly under the influence of the demand side, especially the manufacturing industry with encouraging investment demand, and the global trade volume," the company said.

The Group will conduct a thorough review on the transformation and innovation of its ports operation, including the expansion into upstream and downstream of ports operation and extension of the industrial chain, with a view to promoting the strategic synergy of related internal and external port resources, thereby forming a database for investment cooperation projects of enterprises providing port and shipping services and recommendation for the implementation of such projects.

While staying focused on its core ports operation, the Group will strive to achieve new breakthrough by promoting the development of its key projects. The Group will enhance the overall competitiveness of its homebase port in China and assure the implementation of the consolidation projects.

This news is a total 871 time has been read
Tags: China Merchants Port's 1H Profit Soars 86%