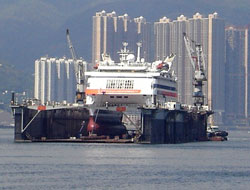 China Merchants Holding is considering plans to expand its use of electrically powered container-handling equipment at its ports and container yards.

China Merchants Holdings (International) is considering plans to expand its use of electrically powered container-handling equipment at its ports and container yards.

China Merchants Holdings (International) is considering plans to expand its use of electrically powered container-handling equipment at its ports and container yards in China in what would be a significant investment in environmentally friendly technology.

The overall aim would be to obtain ISO14000 accreditation at all its main terminals except in Shanghai and other ports controlled by Shanghai International Port Group because China Merchants is a minority shareholder.

China Merchants Holdings is the largest terminal operator in China, with facilities in Tianjin, Qingdao, Ningbo, Xiamen Bay and Zhanjiang.

Details of the move into green port technology are in the process of being developed, but they follow a project at Shekou Container Terminals, one of the three Shenzhen ports in southern China, where electric-powered rubber-tyred gantry cranes and other equipment are being introduced or converted from diesel.

80% of the total has been converted from diesel to electric

Speaking yesterday, Shekou terminal managing director Michael Zhou said that 60 gantry cranes, or 80% of the total in use at Shekou, have been converted from diesel to electric power, while a further 25 e-RTGs have been acquired direct from the manufacturer.

Sixteen rail-mounted gantry have also been introduced to replace diesel-powered equipment. Several of the e-RTGs have been deployed in the terminal"s container yard and depots where operations are being changed to electric power.

In a further ?greenification? of the terminal, senior executives are also in discussions with China Shipping Container Lines about a pilot project to investigate the feasibility of installing shoreside power to allow cold-ironing at Shekou Container Terminal.

Mr Zhou said the 60 converted e-RTGs would save a total of 3,000 tonnes of diesel a year and cut emissions by 90%. The machines have been converted at a cost of Yuan1.5m ($220,600) each, which has been financed internally by China Merchants.

Work is being done in four phases. Mr Zhou said the first two stages have been completed, including stage two in November, which included the deployment of e-RTGs at berth 8, which was inaugurated in September.

The third and fourth phases, which will be finished by the middle of next year, will see the conversion of a further 38 container yards to all-electric power, together with the addition of 25 new e-RTGs and 16 new rail-mounted gantry cranes.

Project is believed to bring between $5m and $11m saving

When the project is completed, Shekou Container Terminal believes, total energy consumption will be reduced by 30%,saving between Yuan40m and Yuan80m per year.

Similar projects are being done at nearby Chiwan Container Terminal and China Merchants Maritime Logistics, with the aim of achieving ISO14000 certification by the middle of next year.

This news is a total 1719 time has been read