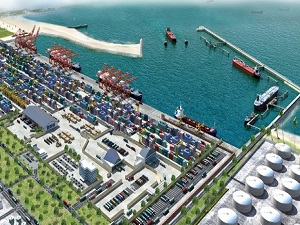 Myanmar has signed an agreement with China’s state owned CITIC Group to start work on the deep-sea port in KyaukPyu, Reuters informed.

The scaled-down framework agreement includes the construction of two berths, and follows extensive negotiations between the parties on the project which originally set out to build ten berths. The project is expected to be implemented in four stages.

As informed, the first stage is expected to cost around USD 1.3 billion, slashed from initially planned amount of nearly USD 7.5 billion. The KyaukPyu port project is one of the central pieces of China’s Belt and Road Initiative.