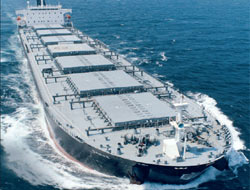 After weeks of pessimistic views on the future prospects of the tanker market, fuelled by actual facts, like the oversupply of vessels and lower oil demand and production, finally some signs of positiveness have remerged.

After weeks of pessimistic views on the future prospects of the tanker market, fuelled by actual facts, like the oversupply of vessels and lower oil demand and production, finally some signs of positiveness have remerged.

As expected, these come from China, one of the world"s leading oil consumers. Actually, it"s the second largest oil consumer, behind the US and above Japan , home to 20% of the world"s population with 1.3 billion people. As a result, its influence in the world market is enough to propel any kind of market, let alone the tanker market. Oil demand in China is a factor affected not only by its developing industry, but also from its car market.

The emergence of a Chinese middle-class is crucial not only for the country"s economic development, but also for economies exporting products into China. Before the recession, China was forecast to surpass US in car sales by the year 2030. The car industry was supported by rapid economic growth and subsidised gasoline prices and as a consequence sales of new cars increased rapidly in the "new" China.

In its latest weekly report, Gibson looks at the potential of China as a leading factor in the tanker market, wondering whether the Asian country is showing signs of awakening. According to figures released by China"s General Administration of Customs, crude oil imports for March rose to 15.87 million tons, only 5.5% down from the relevant months of 2008. At the same time, crude consumption reached 31.26 million tonnes, just 0.25% down from March of last year. It"s also the highest amount from October of 2008, when the recession officially kicked in.

Gibson"s analysis said that ?China"s refinery production also increased to 29.37M tonnes, slightly higher than March last year. The statistics also indicate a decline in clean product stocks amidst recovering fuel demand. The government"s massive stimulus package implemented earlier this year appears to have bolstered retail sales and while China"s exports are still in decline, there has been a measured slowdown in the fall", Gibson said.

In its latest annual report, released a couple of weeks ago, the Bank of Greece stated that the scheduled delivery of 300 new tankers during 2009, a figure double from that in 2008, together with the limiting of cargoes, as a result of slower oil demand, are expected to lead tanker rates to lower levels.

This news is a total 2785 time has been read