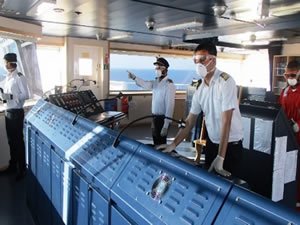 China has opened up 10 ports for foreign crew changes as the country eases entry restrictions for foreign nationals.

According to the Ministry of Transport, Dalian, Tianjin, Qingdao, Shanghai, Ningbo, Fuzhou, Xiamen, Guangzhou, Shenzhen and Haikou have been opened up for foreign ship crew changes. The owner or the manager of the ships can file applications for crew changes at the ports 14 days after the ship leaves the last port of call.

The authorities also introduced a circuit breaker mechanism for the crew changes. If the number of Covid-infected crewmembers from the same shipping company reaches five and 10, all the foreign crews from the company will be suspended from work shift for 15 days and 30 days respectively at Chinese ports. If the number surpasses 10, authorities will prohibit the company’s vessels from crew changes until a re-evaluation is done.

Other requirements for foreign crew change may vary at each port and ship operators are requested to consult with local authorities and agencies before conducting the crew changes.

This news is a total 1774 time has been read
Tags: China opens up 10 ports for foreign crew changes