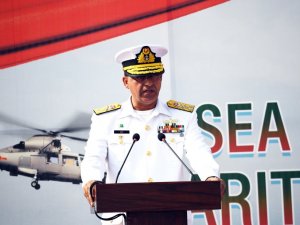 According to the consensus reached between Chinese and Pakistani Navies, the joint drill is taking place from January 6 to 14 in waters of northern Arabian Sea, with the purpose of enhancing security cooperation between the two countries, consolidating the development of the all-weather strategic partnership, and promoting the joint construction of a safe marine environment. The joint drill also aims at innovating the methods of conducting China-Pakistan joint naval drills and enhance the capabilities of the two navies to jointly cope with maritime terrorism and crime. The drill has nothing to do with the regional situation and is not targeted at any third party.

Vice Admiral Asif Khaliq, Ambassador Yao Jing and Rear Admiral Huang Fengzhi, commanding officer of the Chinese participating forces and deputy chief of staff of the Navy under the PLA Southern Theater Command, all spoke at the welcome ceremony.

VA. Asif Khaliq said that the Sea Guardians drill is a strong witness to the continuous development of relations between the two countries and the continuous deepening of maritime cooperation between the two navies. The concept of the “Sea Guardians” bilateral naval exercise is to provide a platform for the two navies to share information, enhance understanding and deepen their common interests. This concept will eventually become the basis for the two navies to test and improve their technical and tactical capabilities, maintain regional marine security, learn from each other and enhance the level of cooperation and synergy.

Ambassador Yao Jing said that the peace of the oceans is related to the safety of each country and region. The name of the joint drill, Sea Guardians, fully reflects the good wishes of the Chinese and Pakistani navies in jointly building a community of shared maritime destiny, and demonstrates the confidence and capability to jointly guard marine peace and security. This is the sixth time that the two navies hold a bilateral joint drill. Yao Jing believes that the Sea Guardians series will be another famous brand of cooperation and exchange between the Chinese and Pakistani armed forces along with the Warrior series between the two ground forces and the Eagle series between the two air forces.

This news is a total 455 time has been read
Tags: China, Pakistan kick off Sea Guardians 2020 naval drill in Karachi