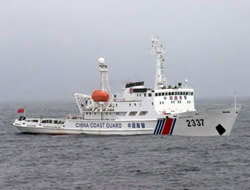 China on Saturday bolstered its claim to islands that Japan says it owns, warning that it would take defensive emergency measures against aircraft that failed to identify themselves properly in airspace over them.

Ties between the Asian powers have been strained for months by the dispute over the islands in the East China Sea, called the Diaoyu by China and the Senkaku by Japan, which are believed to be surrounded by energy-rich seabed.

China’s government-run Xinhua news agency published a map and coordinates for the newly established “East China Sea Air Defence Identification Zone”, which covers most of that sea including the disputed islands. It also released Defence Ministry identification rules for aircraft in the area.

“China’s armed forces will adopt defensive emergency measures to respond to aircraft that do not cooperate in the identification or refuse to follow the instructions,” Xinhua said.

Xinhua said the rules came into force on Saturday and the Chinese air force conducted its first patrol over the zone. The patrol included early warning aircraft and fighters, it said. Japan scrambled fighter jets on Saturday afternoon against two Chinese reconnaissance planes over the East China Sea, the Japanese Defence Ministry said.

A ministry spokesman declined to comment on whether there was any connection between the Chinese patrol activity and the two reconnaissance planes. He said one of the aircraft, a TU-154, came as close as 40 km (25 miles) to what Japan considers its airspace above the disputed islands.

A Japanese Foreign Ministry spokesman said Japan had lodged a strong protest with China’s embassy in Tokyo and reiterated its position that the islands belonged to Japan and China’s action was not acceptable.

“Setting up such airspace unilaterally escalates the situation surrounding the Senkaku islands and has the risk of leading to an unexpected situation,” Japan’s Foreign Ministry said in a statement.

The United States expressed its “strong concerns” to China, with the White House saying the “escalatory development” increased regional tensions and affected U.S. interests and those of its allies.

“We view this development as a destabilizing attempt to alter the status quo in the region,” Defense Secretary Chuck Hagel said in a statement. “This unilateral action increases the risk of misunderstanding and miscalculations.”Patrol ships from China and Japan have been shadowing each other near the islets on and off for months, raising fears that a confrontation could develop into a clash.

The new Chinese rules mean aircraft have to report flight plans to China’s Foreign Ministry or civil aviation administration, maintain radio contact and reply promptly to identification inquiries, keep radar transponders turned on, and bear clear markings of their nationality and registration.The Defence Ministry said it was the “administrative organ” for the zone, Xinhua said.

The zone is outside China’s territorial airspace, but Chinese Defence Ministry spokesman Yang Yujun said in an interview carried by Xinhua that its establishment had a sound legal basis and accorded with common international practices.He noted that other countries had established similar zones and said China would put more in place in future.