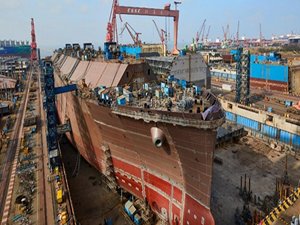 China’s three major shipbuilding indexes all declined in the first seven months of this year.

As of the end of July, China’s accomplished shipbuilding output, newly received orders and orders in hand hold 37.3%, 67.5% and 48.6% of global shipbuilding market share.

This news is a total 2214 time has been read
Tags: SHIPYARDS , NEWBUILDING , ASIA , CHINESE SHIPBUILDING