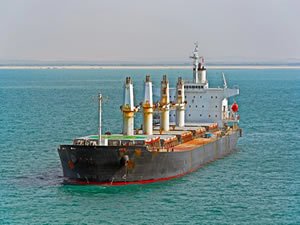 China is set to allow a shipment of Australian coal into the country, according to a person familiar with the matter, despite a ban on such imports remaining in place as tensions between Beijing and Canberra escalate.

A cargo of 135,000 tons of Australian thermal coal on the vessel Alpha Era, which has been waiting since late May to unload at the southern Chinese port of Fangchenggang, is expected to clear customs and is bound for a local user, said the person, who asked not to be identified because the information is private. It isn’t clear why the cargo is expected to clear customs, said the person.

A separate person familiar with the ban on Australian coal, though not the Alpha Era cargo, said the order barring such shipments remained unchanged. The person with knowledge of the Alpha Era said customs didn’t explain why they were processing the cargo.

While it remains unclear why an exception seems to have been made for the Alpha Era cargo, the shipment did arrive at Fangchenggang in late May. That’s about five months before Chinese officials verbally ordered traders to stop purchasing Australian coal.

Two other ships, the Dong-A Eos and the Dong-A Astrea, recently completed unloading Australian coal at the port of Jingtang, while a third vessel, the Dong-A Oknos, is in the process, according to data intelligence firm Kpler. It’s not clear if those cargoes will also be cleared by customs.

The vessels were part of a flotilla of more than 50 ships that have been waiting at least a month to offload coal from Australia, according to separate analysis of shipping data conducted by Bloomberg and Kpler last month. Chinese coal supplies have been limited in recent weeks amid safety checks at domestic mines and a Covid-19 outbreak that slowed truck deliveries from Mongolia.

“The speed of domestic coal price increases in China will to some extent decide how soon we could expect more Australia coal shipments to be discharged,” said Monica Zhu, a dry bulk analyst with Kpler.

China has blacklisted a wide swathe of Australian commodities and foodstuffs, spoiling relations between the two trading partners that have deteriorated since Huawei Technologies Co. was barred from building Australia’s 5G network in 2018. Chinese power stations and steel mills were told to stop using Australian coal and ports were instructed not to offload the fuel, Bloomberg News reported in October.

This news is a total 2499 time has been read
Tags: China to Allow Australian Coal Cargoes Ashore Despite Ban