China to curb expansion of steel 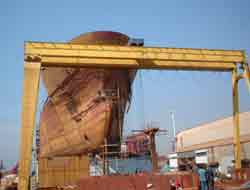 The EU has told China that it would face a growing threat of trade penalties unless it curbed its capacity expansion in steel and shipbuilding.

Beijing - The EU has told China that it would face a growing threat of trade penalties unless it curbed its capacity expansion in steel and shipbuilding.

EU industry commissioner Günter Verheugen had given the warning during a round of high-level meetings in Beijing, EU diplomats, who declined to be identified, said yesterday.

They said feelings were running high over the two sectors because steel was an important industry in nearly all of the 27 EU member states and because the EU's own shipbuilding industry had just been through a painful round of consolidation.

Verheugen alluded diplomatically to the EU's concerns at a news conference.

"We have discussed … certain areas like shipbuilding and steel, for instance, and others where there is a mutual interest to avoid overcapacity. That is … very important," he said.

Verheugen expressed confidence that the round of EU-China industrial policy talks would allow the EU "to benefit from economic development in China without interference and intervention".

One diplomat said Verheugen had even urged Beijing to license fewer steel exporters.
A surge of Chinese steel exports to the EU alarmed Brussels last year, when China became a net exporter of the metal for the first time.

China's steel product exports to Europe jumped to more than 5 million tons last year, from less than 400 000 tons in 2005, and reached 1 million tons this January alone, according to the European Confederation of Iron and Steel Industries.

Although the EU was confident that China's overall steel export growth would slow this year, it feared China could be displacing it in the important US market, the diplomat said.

On shipbuilding, he said Beijing was aware that Brussels was ready to resort to the injurious pricing instrument, an EU trade protection tool that is the equivalent of antidumping measures for shipbuilding.

Verheugen told reporters he regarded growing competition from China not as a threat, but rather as an opportunity for EU industry to raise its game and become more innovative.

The number of antidumping cases brought against China was minuscule compared with its exports to the EU, he said. "A protectionist attitude towards China will not develop."

This news is a total 780 time has been read