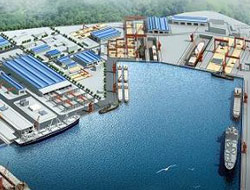 Dalian Shipbuilding Industry Co Ltd, the world's No 4 builder of ocean-faring vessels, is keeping a wary eye on an industry that China increasingly dominates, vice-president Zhang Tao said in an interview.

It hopes to ride out any downturn by focusing on serving state-backed Chinese clients and focusing more on the oil tankers and mid-sized container ships it specialises in, he added.

'We're keeping a close eye on whether the market has started to turn south after the boom of past years,' Mr Zhang said. 'We have our running shoes ready. When the bear comes, we will run faster than our rivals. Last year, we had some low-priced orders to fill. But contracts for this year's production were all secured at good prices,' he said at his offices in the frigid north-eastern port city of Dalian.

To be sure, China's shipbuilders are enjoying their best years ever with orders queuing up to 2009/2010, and heavy demand and capacity constraints at shipyards propping up ship prices.

But fears of a US slump have raised longer-term concerns and walloped shipbuilders' shares, sending Guangzhou Shipyard 36 per cent lower in the past three months and hurting rivals JES International and Yangzijiang Shipbuilding .

And the pace of business was definitely decelerating. Orders this year are unlikely to match the record Dalian Shipbuilding set in 2007, said Mr Zhang, without disclosing its order book. And cancellations had begun to emerge, he added.

Clarkson Research estimated the firm kept orders on hand for 119 vessels with a total capacity of 15.28 million deadweight tonnes (dwt) as of the end of 2007, keeping it busy until 2011.

Flourishing international trade had driven strong demand for ships of all shapes and sizes in past years. But analysts say that demand could slow amid a decelerating US economy, while capacity is expanding not just in China but also in South Korea, India and Vietnam.

Dalian Shipbuilding plays a major role in Beijing's plan to hoist China atop the global shipbuilding sector. The country won over 40 per cent of the world's ship orders in 2007, putting it on track to become the world's largest shipbuilding nation by 2011.

That growth has triggered other problems: the domestic market now faced severe shortages of components, engines, talent and management. More generally, shipbuilders are grappling with the rising cost of raw materials such as steel.

No wonder Mr Zhang is taking a cautious approach.

'A sharp drop in ship prices is unlikely this year, but ship turnover should be lower than last year,' said the executive who joined the firm in 1988, when the shipping market was just as tough.

Dalian Shipbuilding has now started to see termination of shipbuilding contracts, he added without elaborating.

The shipyard, which cranks out mammoth oil tankers and container vessels, plans to deliver 36 vessels with a total of 3.19 million dwt of capacity this year.

'The shipbuilding market was also very bad from 1997 to 2002 because of the Asian financial crisis. The market was dead and no new orders surfaced,' he said.

CSIC plans to fold 16 units, including Dalian Shipbuilding, into one giant listing vehicle and float it either in Shanghai or Shenzhen, newspapers said.

This news is a total 1193 time has been read