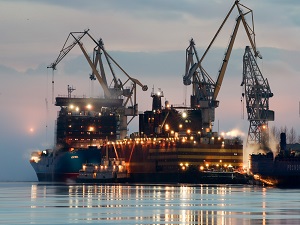 The floating nuclear reactor made by the China General Nuclear Power Group is intended to power Chinese facilities on artificial islands, and offshore rigs, as well as overseas humanitarian and infrastructure projects.

China is well on its way to becoming a world leader in nuclear power; its 37 reactors are already producing 32.4 gigawatts of electricity, and more than 20 more reactors are currently under construction. And now China wants to take the lead in building nuclear power plants in open waters. These floating plants could power oil rigs and islands off the coast, or travel to disaster-struck coasts to provide relief.

Bobbing nuclear power plants are often mounted on a broad-beamed hull, and typically have 25 percent the capacity of their larger, land-based brethren. Those floating reactors can be positioned to coastal and offshore areas that quickly need power (such as areas devastated by tsunamis), or rented out to customers who urgently need a ready supply of electricity.
China Floating Nuclear Reactor ACP 100

China National Nuclear Power (CNNP) is partnering with Chinese shipyards and electric machinery companies to develop a $150 million project. The combination of nuclear reactor suppliers and a shipyard suggests that floating nuclear reactors are going to be the main focus of the joint venture.
China Floating Nuclear Reactor ACPR50

This China Nuclear Group model for a floating reactor is the competitor to the CNNP design.

The project may later expand to include other nuclear-powered civilian ships, like icebreakers, but right now sights seem to be set on floating reactors. China's been planning ship-bound nuclear facilities for a while: China General Nuclear Power Group, CNNC's main domestic competitor, announced in January 2016 that it would build a floating ACPR50S reactor to enter service in 2020, with a thermal output of 200 megawatts and electrical output of 60 megawatts.

CNNC, for its part, signed a 2015 agreement with Lloyd's Register for regulatory support in developing a sea-based, 100-megawatt version of its ACP100 reactor, which is likely the joint venture's intended launch project.
China Floating Nuclear Reactor ACPR50

Floating reactors can support offshore drilling and production rigs by providing them with large amounts of power, thus reducing the need to store extra fuel on board for power generation. That means a much safer rig.

Vice Director Wang Yiren of the National Defense State Administration for Science, Technology, and Industry said that China would prioritize the development of floating nuclear reactors in order to provide offshore oil and gas rigs with power, as well as to operate desalination plants and equipment on remote islands, such as disputed features in the South China Sea.

Putting nuclear reactors on a ship to supply power to remote islands, offshore facilities, and coastal areas isn't a new idea.  The U.S. Army built the world's first floating reactor, the SS Sturgis MH-1A, a 10-megawatt converted Liberty Ship, in 1967.  It supplied power to the Panama Canal Zone from 1968 to 1975, before being defueled in 1977. Decades later, in 2010, Russia launched the 21,000-ton, 70 megawatt Akademik Lomonosov, which is expected to deploy in 2018 or 2019 to Vilyuchinsk, on the remote Kamchatka Peninsula.

Of course, floating nuclear reactors have many issues. They're expensive, for one, and anti-nuclear popular opinion could make deployments controversial—all the more so if to contested areas like the South China Sea. Additionally, a floating nuclear reactor would almost definitely require a substantial crew and security force to protect against accidents and malicious actors.
China Floating Nuclear Reactor CNNP

CNNP hopes to have the first of these floating reactors in operation around 2020. Lloyd's Registry will assist with regulatory and safety issues.

So why all the hoopla about floating nuclear reactors? They point to the scale and ambition of Chinese security and infrastructure projects in the coastal and high seas, as well as a broader vision of future Chinese maritime power.