China's first LNG tanker is in use 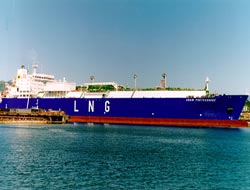 China's first liquefied natural gas (LNG) carrier is expected to go into operation by the end of this year, a senior official with the country's first LNG shipping company said on Sunday.

China's first LNG tanker seen in use by year end

China's first liquefied natural gas (LNG) carrier is expected to go into operation by the end of this year, a senior official with the country's first LNG shipping company said on Sunday.

China's first LNG terminal in southern China's Guangdong province began to take in the clean fuel from Australia in May last year. It is jointly owned by China National Offshore Oil Company (CNOOC) and BP and can handle 3.7 million tonnes of gas a year.

CLNG has ordered two more tankers of the same size for the Guangdong project, with one expected to be delivered in mid-2008 and another by the end of 2008, Xu said at an oil conference in Shanghai.

The company has also booked two similar-sized LNG carriers for a project in neighbouring Fujian province, with one delivery set for mid-2009 and another by the end of that year, Xu said.

The CNOOC-run Fujian project, with a capacity of 2.6 million tonnes a year, will start to receive gas from Indonesia in early 2009.

Xu said CLNG had also submitted orders to a Shanghai shipyard to build tankers for a planned LNG facility in Shanghai. He did not specify the ships' sizes.

The Shanghai project, set for operation in 2009 and with initial capacity of 1.1 million tonnes, is jointly run by CNOOC and Shanghai's Shenergy Group Ltd.

The Shanghai facility has secured gas sources from Malaysia.

CNOOC, a leader in China's LNG market, is China's third-largest oil producer and the parent of Hong Kong- and New York-listed CNOOC Ltd.

This news is a total 1266 time has been read