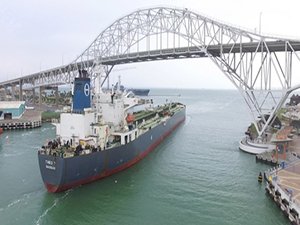 Oil prices steadied on Monday as news that China planned to ship large volumes of U.S. crude in August and September countered rising tensions between the two countries and a delay in the review of their trade pact over the weekend.

“Clearly the market is not tightening as quickly as initially anticipated. Demand is taking longer than expected to get back to normal levels,” ING Group said.

However, in a positive signal, Chinese state-owned oil firms have tentatively booked tankers to transport at least 20 million barrels of U.S. crude for August and September.

Investors are also looking for more clues on future supply from a meeting this week of a panel representing ministers of the Organization of the Petroleum Exporting Countries and its allies, a group known as OPEC+.

The Joint Ministerial Monitoring Committee (JMMC) monitors OPEC+ production curbs agreed earlier this year. Last month, the JMMC recommended that cuts be eased from Aug. 1 to about 7.7 million barrels per day (bpd) from a reduction of 9.7 million bpd since May, in line with an earlier OPEC+ agreement.

Iran’s oil minister, Bijan Zanganeh said “OPEC’s performance has been successful because the price of oil has risen from $16 in May to around $45 and has stabilized.”

ANZ estimated that demand had risen 8 million barrels per day (bpd) over the past four months to 88 million bpd – still 13 million bpd below this time last year.

In the United States the number of oil and natural gas rigs operating last week remained anchored at a record low for a 15th week, even as higher oil prices prompt some producers to start drilling again.

This news is a total 2971 time has been read
Tags: China, u.s. oil exports