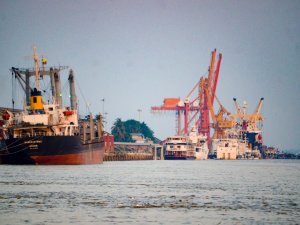 Chaos that swept China’s soybean market in recent weeks as lossmaking crushers flipped cargoes and closed plants appears to have eased by Friday,

Allaying fears of widespread contract defaults like those that shook the world’s top consumer in 2014.

Three ships carrying soybeans that had been sitting anchored off the major port of Rizhao for weeks left the region, crush margins were positive for only the second time since February, and traders said they had not heard of other resales.

Much still depends on demand for soymeal from the livestock industry over the upcoming peak demand months, with soymeal inventories at their highest levels on records back to 2010.

But traders and crushers said business conditions improved dramatically this week, as some major crushers suspended output, cutting excess soymeal production and giving a boost to soymeal prices, which hit their highest since May.

“Things are getting better, but deliveries in general are still very slow,” said a sales manager at a crusher in northeastern China.

On Thursday, crushers were making more than 80 yuan ($12) per tonne in profit in Rizhao , compared with a loss of nearly 40 yuan at the start of the week and more than 340 yuan a tonne in early June, the biggest since 2014.

The resale of more than 500,000 tonnes of product in recent weeks has kindled memories of 2014 when buyers ripped up purchase contracts, fraying counterparty trust and costing companies millions of dollars.

“I think overall, we have got out of the chaos. The market will stabilise gradually starting from this month,” said Tian Hao, senior analyst with First Futures in Tianjin.

“Imports will start diminishing. Livestock demand will improve in the third quarter as people consume more oil and meat, and send gifts during the holiday season,” he said.

Many Chinese offer meat products or cooking oil as gifts during traditional festivals like Mid-Autumn Festival, which falls in October this year.

The turnaround came after a prolonged build up of congestion at major port Rizhao, Shandong, which was overwhelmed by a flurry of soybean cargo arrivals, while huge domestic stockpiles of soymeal and falling meal prices hurt crushers’ margins.

The threat of environmental inspections across the province had also rattled operators in the nation’s top soybean crushing region.

Signs emerged on Friday that the congestion was easing further as three dry bulkers which had been stranded off Rizhao since mid-July headed for new destinations. It was not clear if the carriers had discharged cargoes or been resold.

Great Victory was on its way to Vancouver, Canada, Tuo Fu 6 was heading to Panama, and London 2012 was destined for Australia.

This news is a total 758 time has been read
Tags: China’s soybean crushers get reprieve as port chaos starts to clear