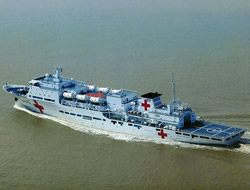 While the navies of the United States and its allies rushed to the aid of the typhoon-hit Philippines, a state-of-the-art Chinese hospital ship has stayed at home and in doing so has become a symbol of Chinas tepid response to the crisis.

The decision not to deploy the 14,000-tonne “Peace Ark”, one of the newest and biggest hospital ships in the world, is one that contrasts with a recent charm offensive across Southeast Asia by China as it seeks to bolster ties and ease tension over the disputed South China Sea.

Even China’s usually hawkish Global Times, a tabloid owned by the People’s Daily state mouthpiece, on Friday called for the Ark to sail to the Philippines, where an international naval flotilla, headed by a U.S. aircraft carrier strike group, is delivering food, water and medicine.

Initially, China pledged $100,000 in aid to the Philippines after Typhoon Haiyan roared across central islands a week ago, and a further $100,000 through the Chinese Red Cross – figures dwarfed by multi-million dollar donations from countries and corporations around the world.

While tension between China and the Philippines has escalated recently over Manila’s bid for a U.N. court ruling against Beijing’s claim to much of the South China Sea, analysts and diplomats say its paltry response to the humanitarian crisis could undermine diplomatic gains.

The Chinese government has not ruled out more aid but foreign analysts are puzzled by the absence of the Peace Ark, a ship tailor-made for such emergencies.

“It is a self-inflicted wound to Chinese influence and prestige,” said Rory Medcalf, a security analyst at Australia’s Lowy Institute.

China’s Defence Ministry did not respond to a request for comment about whether the ship would be sent to the Philippines.

Just last month, the Peace Ark returned to its Shanghai berth after an unprecedented four-month, eight-country deployment that saw it work with other navies and treat thousands of patients during goodwill stops.

As part of the voyage dubbed “Harmonious Mission 2013″, the Ark – with 300 hospital beds, 8 operating theaters and more than 100 medical staff – joined a disaster relief exercise led by the Association of Southeast Asian Nations, which includes the Philippines.

Just this week in Hawaii, U.S and Chinese troops staged their first disaster relief exercise – another sign that China is increasingly keen to use its expanding military muscle for humanitarian, as well as security needs.

Over the past year, China has stepped up attempts to win over the region, despite the tension over the South China Sea, with a flurry of visits by President Xi Jinping and Premier Li Keqiang and economic deals, while re-enforcing a message of “comprehensive strategic partnership”.

Medcalf said he was “astounded” that China’s leaders had not used the Peace Ark to make a major gesture to the region during the Philippines’ crisis.

Instead of a move that could have served their interests by neutralising the Philippines diplomatically and sending the message to the region that the United States was no longer needed, they had played into the hands of Washington which has announced a pivot, or re-balance, towards Asia.

“It is showing that the re-balance is still real and the presence of American forces in the region continues to be a very effective posture,” Medcalf said.

This news is a total 1707 time has been read