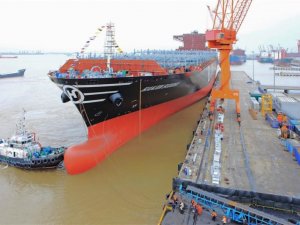 China’s Yangzijiang Shipbuilding Holdings Ltd reported a 73 percent increase in second-quarter net profit, helped by higher revenue from the construction of larger-size vessels, sending its shares to their highest in more than six years.

Yangzijiang posted a net profit 719.9 million yuan ($107.12 million) for the quarter ended June, boosted by one-off gains, compared with 415.4 million yuan in the year-ago period. Revenue rose 27 percent, it said in a statement late on Monday.

Shares of the shipbuilder, which has a market value of about $4.5 billion, pared some gains to trade 4 percent higher after touching S$1.605 – their highest since June 2011. The stock has gained about 82 percent so far this year as of Monday’s close.

Yangzijiang, which builds a range of vessels including large container ships, bulk carriers and liquefied natural gas carriers, said its order book stood at $4 billion as of June 30.

The company, which has four shipyards in China’s Jiangsu province, secured 33 new shipbuilding orders worth $832 million in the year to date, including orders for three container ships and three bulk carriers in the second quarter.

The company was confident of meeting its order win target of $1.5 billion in 2017, Executive Chairman Ren Yuanlin told reporters on Tuesday. Margins could, however, come under further pressure this year, he said.

The shipbuilder saw gross profit margins fall to 20 percent for the quarter due to lower contract prices.

“As long as we are not losing money by taking the order, we will take it,” Ren said. “We are not too concerned about the gross margin as along as we don’t make a loss.”

Yangzijiang, which slashed its workforce for three straight years to ride out a prolonged downturn in the industry, may look at increasing staff at the end of the year, bolstered by the new orders, Ren said.