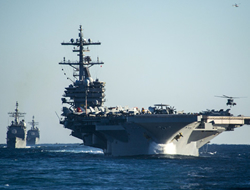 Given Chinas abrupt, and frankly non-substantiated expansion of their air defense identification zone (ADIZ) recently, its easy to immediately assume that China was operating aggressively in their latest encounter with the U.S. Navy in the South China S

Such an assumption would be as incorrect as believing China has the right to interrogate any aircraft that enters the East China Sea. USS Cowpens, a highly capable guided missile cruiser was operating in close proximity of the Liaoning, China’s newest- and only- aircraft carrier.

Escort ships such as the one that got in the way of the Cowpens are there for a reason, they maintain a perimeter around the high value asset, a.k.a. the Liaoning.  This perimeter applies to everyone, not just American ships, but literally all ships.

The U.S. Navy is big on exercising their right to navigate freely on the high seas outside of territorial waters.  If they can go there legally, they darn well will, you can guarantee it, especially if someone tells them they can’t.  At the end of the day though, they’re enforcing international law and ensuring that everyone can freely operate in international waters.  Preventing them from doing so and you stand at risk at an international confrontation, whether right or wrong.

I respect the Chinese for standing their ground in this case, because frankly I think it was warranted.  That said, I think they brought this confrontation on themselves when they expanded their ADIZ for no reason whatsoever and are overhyping an incident that would have likely been the same reaction had sides been reversed.

This news is a total 1480 time has been read