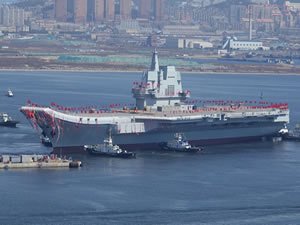 Taiwan's navy and air force were deployed on Sunday as a Chinese aircraft carrier group led by the country's newest carrier, the Shandong, sailed through the sensitive Taiwan Strait, the day after a U.S. warship transited the same waterway.

While it is not the first time China’s carriers have passed close to Taiwan, it comes at a time of heightened tension between Taipei and Beijing, which claims the democratically-ruled island as its territory.

Taiwan has complained of repeated Chinese military activity, including China’s regular flying of air force aircraft near the island. China says such drills are aimed at protecting the country’s sovereignty.

Taiwan’s Defence Ministry said the Shandong, which was formally commissioned almost exactly one year ago, accompanied by four warships had set out from the northern Chinese port of Dalian on Thursday.

After passing through the narrow Taiwan Strait on Sunday, the carrier group was continuing in a southerly direction, it added.

China’s Defence Ministry did not immediately respond to a request for comment. China has previously said that such trips by its carriers through the strait are routine missions, often on their way to exercises in the disputed South China Sea.

“With the support of the people, the national armed forces have the confidence and ability to guard the homeland, and ensure national security and safeguard regional peace and stability,” it added.

On Saturday, a U.S. warship sailed through the Taiwan Strait, the 12th such mission by the U.S. Navy this year.

Taiwan President Tsai Ing-wen is overseeing a revamp of the island’s military, rolling out new equipment such as “carrier killer” stealth corvettes.