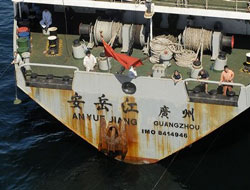 A Chinese ship loaded with arms and ammunition sailed away from a South African waters and is on its way to Luanda, Angola to unload its cargo bound for Zimbabwe.

A Chinese ship loaded with arms and ammunition sailed away from a South African waters and is on its way to Luanda, Angola to unload its cargo bound for Zimbabwe.

South Africa's High Court ruled Friday the cargo could be offloaded in the Durban port, but it could not pass over South Africa roads to get to Zimbabwe, a country in crisis because of an election stalemate.

Durban's dockworkers also said they would not handle the cargo, fearing the arms would be used by the Zimbabwean government against its own people.

A South African government source told CNN the China-flagged An Yue Jiang had sailed away from Durban Friday evening before the High Court's order could be served to the ship's captain.

The ship was headed to the port of Luanda, Angola, according to the South African Department of Transport.

Zimbabwe is in turmoil after elections last month that saw the opposition Movement for Change party win a majority of seats in the parliament, although Mugabe's ZANU-PF party has contested 16 seats, claiming the MDC cheated.

The Zimbabwe Electoral Commission began a recount of 23 of those districts Saturday morning.

The presidential election, however, has sparked much more concern. The government of President Robert Mugabe, who has been in power since Zimbabwe won its independence in 1980, has refused to release results of that vote before a recount.

The MDC says its candidate, Morgan Tsvangirai, won the election, but ZANU-PF has claimed the MDC engaged in election tampering. The delay in releasing the vote sparked violence and a government crackdown on opposition members.

"This union has a proud history of taking action against regimes which it disapproves of in the past, but this is certainly the first time it has gotten involved in an African regime like Zimbabwe," David Cockroft, general secretary of the International Transport Workers Federation, said.

"I don't think there's much doubt that the (dock) workers ... are very strongly against the Mugabe regime," he said.

Cockroft said that arms had almost certainly been shipped to Zimbabwe through Durban in the past, but the size of this shipment -- "more than a million pounds" and 3.5 million rounds of rifles, small arms, mortar shells and rocket-propelled grenades -- made it more noteworthy.

Earlier, South African Revenue Service spokesman Adrian Lackay told CNN "that it is commonplace for landlocked neighboring states in southern Africa to use South African ports of entry for the transshipment of goods."

Lackay indicated that the ship had complied with South African regulations requiring it to disclose the contents of the cargo it is carrying.

A government spokesman, Thembo Maseko, told CNN, "There were arms on the ship."

The Chinese Foreign Ministry issued a statement in a fax to the Reuters news agency saying that China and Zimbabwe have normal trade relations, that the Chinese government takes a "prudent and responsible" position on arms deals and that it does not involve itself in the internal affairs of other countries.

This news is a total 1011 time has been read