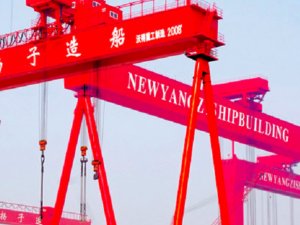 During the first six months of this year both the shipbuilding volume and the orders in hand of Chinese yards declined.

During the first six months of this year both the shipbuilding volume and the orders in hand of Chinese yards declined.

According to the statistics released by China’s Ministry of Industry and Information Technology, in the first half of 2020, the nation’s shipbuilding output was 17.58m dwt, a decline of 10.6% year-on-year.

Chinese shipyards had an extended shutdown following Chinese New Year at the end of January due to the Covid-19 pandemic, but operations returned largely to normal in the second quarter.

China's shipbuilding industry maintained its leading position globally in H1 and its shipbuilding output, newly received orders and orders in hand were 37.2%, 67.5% and 48.2% respectively of global shipbuilding market share.

In H1, the concentration ratio of three major shipbuilding indexes from ten leading Chinese shipyards was increasing, an outcome of shipbuilding industry consolidation in China.