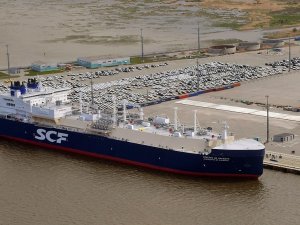 Russia’s President Vladimir Putin attended the naming ceremony for the new carrier, the first in a series of 15 carriers to be constructed for the Yamal LNG project, on June 3.

The vessel, named after the former chief executive of French oil company Total who was killed in an airplane accident in Moscow in 2014, has been designed for year-round transportation of LNG in the severe environment of the Kara Sea as part of the Yamal LNG project.

This project allows for the development of the Yuzhno Tambeiskoyegas condensate field and the construction of a plant with a capacity of 16.5 million tonnes of LNG per year.

The ARC-7 class ice-breaking vessel, which has a capacity to carry 173,600 cubic meters of LNG, made its first arrival at the Russian port of Sabetta in late March after conducting ice testing.

Ordered under a USD 320 million shipbuilding deal in 2014, the 299-meter-long vessel was delivered by South Korean shipbuilder DSME to its owner, the Russian shipping company Sovcomflot, earlier in March.

This news is a total 670 time has been read
Tags: Christophe de Margerie Officially Named