Chrysostomou is a candidate 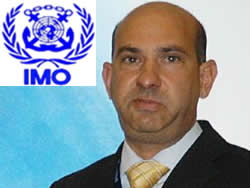 Under IMO rules Mr Mitropolous can only serve two consecutive four-year terms as secretary general. His term of office will end at the end of 2011.

Documents have been seen confirming Cyprus"s pending nomination of Andreas Chrysostomou, the current chairman of IMO"s Marine Environment Protection Committee, and the Philippines has confirmed that it will be nominating Neil Ferrer, the chairman of the Maritime Safety Committee.
In its nomination for Mr Chrysostomou, Cyprus highlighted his career as a naval architect, his seven years chairing the MEPC and, prior to that, the ship design and equipment subcommittee.

It also points out the role Mr Chrysostomou played in reducing the IMO budget in 2001 when he led the group of experts charged with reassessing the organisation"s finances.

The Philippines has yet to officially submit Mr Ferrer"s name, but a spokesperson for the country has confirmed that his name will be put forward soon.
These influential names within the IMO join the candidate from Japan, Koji Sekimizu who is director of the IMO safety division.

It is also understood that Lee-Sik Chai of Korea and Nigeria"s Monica Mbanefo will also be nominated by their respective countries when the formal nomination period starts at the next meeting of the IMO council in November.

The formal procedures for the nominations and election will be decided then, but member states are likely to have until March next year to submit their candidates.
The election of the next secretary general will then take place when the council next meeting, in June 2011 in London. The candidates will be invited to address the council in a open session, followed by a private session with only council member states, prior to the council voting through a secret ballot.

In the run up to this the candidates will be engaged in intense talks with other IMO member state representatives, trying to secure as many votes as possible.

As chairmen of the IMO"s two leading committees Mr Chrysostomou and Mr Ferrer command a huge amount of respect within the halls of the UN body, so the competition is likely to be intense.

During his term as chairman of MEPC, Mr Chrysostomou has been applauded for his handling of the many differing views on emissions and climate change that have brought an ever increasing number of submissions to the committee members. He has guided MEPC in its development of the ballast water convention, as well as chaired the diplomatic conference for the adoption of convention on ship recycling last year.

This news is a total 4472 time has been read