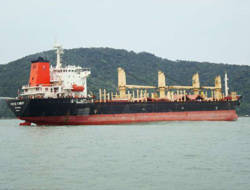 A weekly container service linking Southeast Asia with the East Coast of North America, starting on May 3, brings new traffic to the struggling Port of Halifax, Nova Scotia.

The Halifax Port Authority expects movement of 500 to 600 TEUs each week by this service as the summer progresses. The service, called AWE 4, will connect Vietnam, Malaysia, Singapore and Thailand with Canada and the U.S. Midwest through Halifax. The port rotation will be Singapore, Shekou, Hong Kong, Yantian, Nortfolk, New York, Halifax, and Singapore.

The global economic recession has hit Halifax hard. Although there are as yet no statistics for the first quarter this year, container volume dropped 21 percent in 2008 to 387,347 TEUs, or to 3.2 million metric tons from 4.2 million in 2007.

This news is a total 1769 time has been read