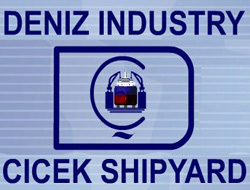 Cicek Shipyard has begun construction of the first of three 58,000 dwt Supramax bulk carriers, the largest vessels ever to be built in Turkey.

Cicek Shipyard has begun construction of the first of three 58,000 dwt Supramax bulk carriers, the largest vessels ever to be built in Turkey.

Ordered by the Bayraktar Shipping Group, they will be constructed in the shipbuilder's panamax-sized building dock, which is currently being extended to 215 m and when completed will be 250 m long.

Cicek Shipyard started construction of the building dock at its Tuzla Bay facility in 1999, but lack of government support resulted in its not being completed until 2006.

The first (and still the sole) such facility in Turkey, it is served by a 300 tonne gantry crane and has already been used to construct four IMO II chemical tankers. Three of these were ice class 1A vessels for Besiktas Shipping, the 18,000 dwt Besiktas England and Besiktas Scotland, and the 26,000dwt Besiktas Jutland, while the fourth is a 20,000 dwt tanker currently under construction for the Kaptanoglu Group.

The yard also has a 160 m long slipway served by a 200-tonne gantry crane and a smaller slipway suitable for building coastal vessels.

Cicek Shipyard's vice president, Berke Cicek, states: "It was impossible for a private Turkish shipyard to build a 15,000 dwt vessel when we started our expansion plan but the outlook for building supramaxes and capesizes in Turkey now looks very promising."

In addition to the 58,000 dwt Supramax bulk carriers, Cicek has contracts for two 1,300 TEU containerships, also for Bayraktar, that are due to be launched in April and August this year, two 24,000 dwt bulk carriers for a foreign shipping company, one for delivery next year and the other in the first half of 2010, and four 3,150 dwt IMO II chemical tankers for delivery in 2008.

This news is a total 2551 time has been read