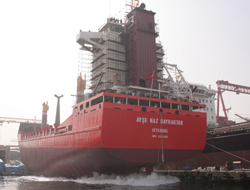 The 1300TEU ship was named Ayse Naz Bayraktar and is due for delivery in July 2008. She is the first of two 22,000dwt multipurpose container ships ordered from the yard by Bayraktar Shipping, a private Turkish owner that currently operates a fleet of six container ships, all built between 1999 and 2005, and five general cargo vessels.

The design of these two ships allows for a high intake of 9ft 6in high containers and two hatches can accommodate 45ft containers, including the 2.5m wide 'palletwide' containers now widely used in the intra-European trades. However, they have been designed in such a way that they could be switched to breakbulk or bulk operations if required.

Bayraktar's existing container vessels are all chartered out to leading global carriers for feeder operations and the new vessels are expected to be similarly employed, although they are equally suitable for trades such as Mediterranean - North Europe.

Cicek Shipyard, located in Tuzla Bay, has two slipways and a panamax-sized building dock. Construction of vessels in the building dock began in 2006.

The first and still the only such facility in Turkey, it is served by a 300 tonne gantry crane and has already been used to construct four IMO II chemical tankers. Three of these were ice class 1A vessels for Besiktas Shipping, the 18,000dwt Besiktas England and Besiktas Scotland, and the 26,000dwt Besiktas Jutland, while the fourth is a 20,000dwt tanker currently under construction for the Kaptanoglu Group.

The building dock is currently being extended to 250m in length.

Construction of Ayse Naz Bayraktar took place on the larger of the yard's two slipways. This is 160m in length and is served by a 200-tonne gantry crane.

A smaller slipway suitable for building coastal vessels is currently being used for the construction of four 3,150 dwt IMO II chemical tankers for delivery in 2008. 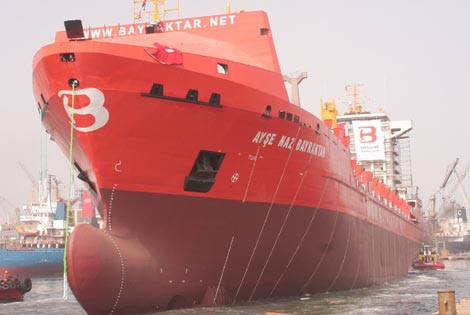 This news is a total 2290 time has been read