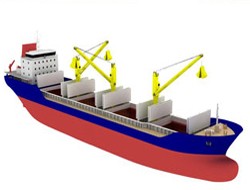 The current handy-size bulk carrier fleet is now aging and Cicek believes that many owners will soon be placing orders for replacement tonnage that both meets new regulations and offers improved efficiency.

Its new vessel, designed in-house, qualifies on both counts.

"Our new double-hull design meets all current and anticipated environmental and safety regulations," says Berke Cicek, Vice President of Cicek Shipyard. "In particular, it will qualify for the additional class notation CSR (Common Structural Rules) and will be compliant with the new Performance Standard for Protective Coatings (PSPC), which is intended to increase vessel safety and lifecycle by preventing corrosion.

"We have also concentrated on designing a vessel that is economical to operate," he adds/. "Many owners of older tonnage today are suffering because main engines built 15 or 20 years ago are expensive to run both in terms of bunkers and maintenance. We expect our vessel to operate with a crew of 22 and to maintain a service speed of 13 knots on just 21.5 tonnes a day. Further economies are expected due to the arrangement of the four holds, which are designed to be easily cleaned, thus saving time and labor."

The standard design features 35-tonne cranes, enabling larger than normal grabs to be used for bulk cargoes and for loading heavy unitised cargoes such as steel coil. Strengthening of the tank top to 20 tonnes per square meter and MacGregor hydraulic hatchcovers are help increase the speed of loading and discharge.

Although this 25,000-tonner is intended to be a standard design, Cicek is quite flexible and is happy to discuss with owners any special requirements they may have including different engine specifications for a higher service speed and alternative crane configurations.

The yard is also able to offer delivery dates in 2010. 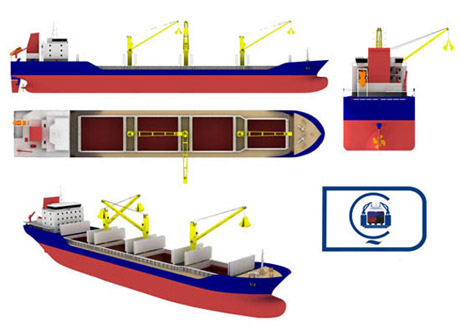 Construction of vessels in the building dock began in 2006. The first and still the only such facility in Turkey, it is served by a 300 tonne gantry crane and has already been used to construct four IMO II chemical tankers. The building dock is currently being extended to 250m in length.

Construction of smaller ships takes place on two slipways. The larger one is 160 m in length and is served by a 200-tonne gantry crane. A smaller slipway suitable for building coastal vessels is currently being used for the construction of four 3,150 dwt IMO II chemical tankers for delivery in 2008.

This news is a total 2077 time has been read