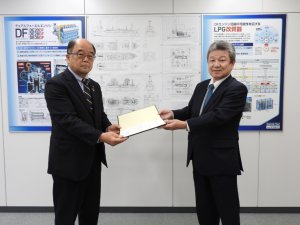 The ship has been developed in cooperation with Iino Gas Transport, Osaka Gas, Izumi Steel Works, and Miura Shipbuilding in terms of safety assessments.

As explained, the approval is based on ClassNK’s Rule Part N which adopts IGC Code and its Guidelines for Ships Using Low-Flashpoint Fuels.

The LPG reformer is designed to convert LPG into synthetic methane gas equivalent to the kind found in LNG. Due to being mainly composed of propane and butane, LPG is susceptible to knocking (abnormal combustion), making it difficult to use as a fuel for lean burn gas engines and dual fuel engines.

In contrast, by converting LPG into synthetic methane gas with the LPG reformer prior to fueling the engine, the risks of knocking can be restrained, which is expected to have an equivalent operational performance observed when using LNG, according to ClassNK.

“We have cautiously confirmed the design’s safety and are proud to be involved with this project. LPG is starting to become an option in the maritime industry and we have high expectations for the possible benefits that its use may bring in terms of environmental safety and efficiency,” T. Shigemi, ClassNK Senior Executive Vice President, said.

“We have developed dual-fuel engines from the view point of global warming prevention, and this LPG reformer will provide more options for customers. We would like to make further efforts toward a zero carbon society,” S. Kinoshita, Daihatsu Diesel President, commented.

This news is a total 466 time has been read
Tags: ClassNK, Daihatsu Diesel, LPG, LPG Carrier.