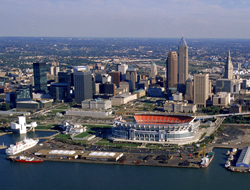 American Great Lakes Port of Cleveland is projected to experience strong growth in the medium term, underlining a need for a larger site on the lakefront.

American Great Lakes Port of Cleveland is projected to experience strong growth in the medium term, underlining a need for a larger site on the lakefront.

American Great Lakes Port of Cleveland is projected to experience strong growth in the medium term, underlining a need for a larger site on the lakefront, north of East 55th Street, reports The Cleveland Plain Dealer.

However, critics of the plan claim that the port's shipping business has been static for years, prompting concerns that an expanded facility will end up underused and a waste of taxpayers' money.

Chris Ronayne, former planning director for Cleveland said, "The jury is probably still out" on the move to East 55th.

"What needs to be further discussed is the business case," said Mr Ronayne, president of University Circle Inc. "Does the project pencil out? What is the economic yield?"

Adam Wasserman, president of the Cleveland-Cuyahoga County Port Authority, believes the port must diversify and grow beyond its dependence on the steel industry.

In a recent draft business plan to the board, Mr Wasserman's staff projects a big decline in business this year, due to the slowdown in the global economy, followed by four years of growth. A chunk of that will come from the container trade with Asia and Europe.

Cleveland does not handle containers at present, although port officials have talked of their arrival since the early 1990s.

According to the draft business plan, the Cleveland port would handle 32,000 containers sailing in from Canada's Montreal and Nova Scotia by 2013, the report added.

The likeliest scenario involves short-sea shipping, whereby the larger ocean-going vessels unload containers at deep-water ports in Nova Scotia, and then the cargo would be reloaded onto smaller vessels that would head down the St. Lawrence Seaway and to Cleveland.

However, Jim Ehrbar, a partner with Worldwide Logistics Partners in Berea warns that short-sea vessels wouldn't be able to carry enough containers for a cost-effective service, "You've got to stop thinking Cleveland will get anything but bulk cargo," Mr Ehrbar said. "It's (containers are) not going to happen. Anybody who knows anything about international shipping will tell you the same thing."

According to a study commissioned by the port in 2007, a Halifax-to-Cleveland line was competitive on several trade routes. The main stumbling block was the winter closure of locks along the seaway that force shippers to find alternative transport several months a year, the report noted.

Mr Wasserman added that the port is not pinning its future on the containers trade, "I would say [containers] are somewhere near a third of what we're talking about," he said.

This news is a total 2922 time has been read