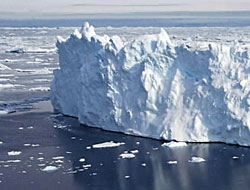 Global warming is opening up the Northern Sea Route for the uncontrolled movement of foreign ships.

Global warming is opening up the Northern Sea Route for the uncontrolled movement of foreign ships.

Russian Deputy Prime Minister Sergei Ivanov said Wednesday that he is concerned that global warming is opening up the Northern Sea Route for the uncontrolled movement of foreign ships. Many Arctic specialists agree that global warming is causing ice to retreat around the outer edges of sea ice drifting on the Arctic Ocean which is opening up previously closed maritime routes like Russia's Northeast Sea Route and Canada's Northwest Passage.

"I ask you once again to pay special attention to the Arctic Region," Sergei Ivanov said speaking at a meeting of the Maritime Board under the Russian government.

Ivanov said that before the meeting, Emergency Situations Minister Sergei Shoigu had shown him satellite images from five years ago compared with the present day of ice formation in the Russian part of Arctic.

"Ice is retreating and soon practically all our coastal zone will become open water, and we will face what we have for so long avoided: foreign cargo vessels will be able to carry freight beyond our territorial waters," he said.

The deputy premier proposed establishing a network of observation stations in the Russian part of the Arctic. "We need to become familiar with our internal arctic territories to dictate our terms from there," he said.
The Northern Sea Route, running along Russia's Far Eastern and Siberian coasts, is usually only free of ice for around eight weeks a year.

This news is a total 679 time has been read