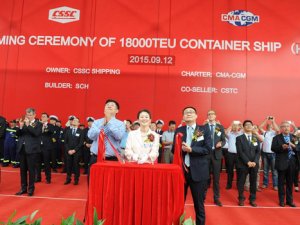 The 18,000 TEU ship was named CMA CGM Zheng He after the 15th century commander of the Ming dynasty’s merchant and exploration fleet, and is the second ULCS ever to be built at a Chinese shipyard.

The first vessel in this series of three, and the first ever mega boxship to be built in China, was CMA CGM Vasco Da Gama, which was delivered to the French line on July 27.

CMA CGM Zheng He was constructed in Shanghai Jiangnan-Changxing Heavy Industry, a holding company of SWS. The vessel was designed by Marine Design & Research Institute of China (MARIC), and financially supported by China Exim Bank.

The ship is 399 meters long, 54 meters wide, and together with her sister ship is the largest vessel in CMA CGM’s fleet.

The third 18,000 TEU giant in the series – CMA CGM Benjamin Franklin – is scheduled for delivery in November 2015.