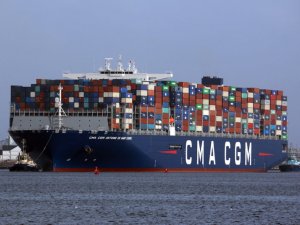 French shipping group CMA CGM said on Friday it would introduce an exceptional surcharge after its first quarter earnings were hit by a sharp rise in bunker fuel prices.

CMA CGM, one of the world’s biggest container lines, did not detail the amount of the surcharge, nor the date of its implementation.

Oil prices hit their highest since late 2014 at $80.50 a barrel this month, lifted by the United States’ exit this month from the landmark nuclear deal with Iran and imposed sanctions against the OPEC member.

“In order to deal with the increase in bunker prices, which continue to rise into the second quarter, we are implementing an exceptional surcharge,” CMA CGM chief executive Rodolphe Saadé said in a statement.

CMA CGM reported a quarterly core earnings before interest and tax (EBIT) of $88 million, down from $252 million a year earlier. The group EBIT margin fell to 1.6 percent over the period from 5.5 percent a year earlier.

First quarter rose $5.41 billion, up 17.1 percent from the year-earlier period, buoyed by a rise of 15 percent in volumes, CMA CGM said, citing good results of vessel-sharing Ocean Alliance and strong momentum of the African/US and North America/South America lines.

“In this context, CMA CGM expects an improvement in the market environment in the second half of 2018, excluding bunker costs and the impact of exchange rates,” it said.