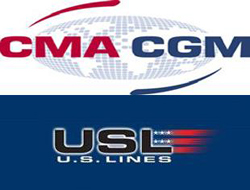 FRENCH-based container shipping company CMA CGM says it is buying US Lines for an undisclosed sum.

FRENCH-based container shipping company CMA CGM says it is buying US Lines for an undisclosed sum.

US Lines name specialises in the US West Coast, China and Australia and New Zealand trades and runs a joint service with CMA CGM subsidiary ANL which is believed to be one of the reasons for the purchase.

The US Lines brand was bought by Ed Aldridge in 2003 who set up the company as a niche player running chartered vessels. The original US Lines had become bankrupt in 1986.

CMA CGM reaches an agreement to acquire US Lines

In a move to further expand its global market presence, CMA CGM Group today announced that it has reached an agreement to acquire US Lines based in Santa Ana, California (USL). US Lines is the vessel sharing partner of ANL, expert of the Australian-New Zealand market, and subsidiary of CMA CGM Group.

The two carriers currently operate with eight ships in a weekly tri-continental service. Both lines will continue to operate under their own brands, with USL managed by its existing global management team. This team, supported by a proven and dedicated group of professionals, has succeeded in building USL into a market leader.

USL is composed of 5 companies realizing, on the whole, a 2007 estimated turnover of 145 M USD. The company uses chartered ships and employs 113 workers.

The acquisition of US Lines is in line with the aim of reinforcing the position of the ANL offer. The complementarity of US Lines with ANL allows a more global solution on the triangular trade connecting the US West Coast, Australia, New Zealand and Southern China.

This news is a total 1378 time has been read