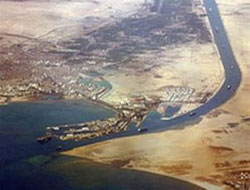 Other loops that may take the longer route in future include the Epic service from Europe to India and Pakistan, and the Nemo service to Australia.

Re-routing the 9,400 teu vessels deployed in the FAL2 service produces savings per ship of around $330,000 a sailing, said Mr Salem. That adds up to $17m a year. CMA CGM and China Shipping contribute four ships each to the service, while a ninth was recently added to compensate for slow steaming.

The two lines are now considering whether to divert headhaul westbound FAL2 sailings as well.

Suez Canal fees for ships of that size amount to $600,000 per transit, whereas the additional fuel costs for the extra 3,400 miles, at ship speeds of 20 knots, come to around $250,000 a vessel. In addition, lines are saving the insurance surcharges now being levied on vessels going through the Gulf of Aden where piracy attacks are rife.

After two vessel deviations so far, ?we are very satisfied with the experiment,? said Mr Salem. ?The savings are very significant.?

Port schedules will remain the same, with the extended voyage taking exactly seven days more, so that the same weekly calls can be maintained.

?We are looking for other services to deviate. We have to look at our system costs,? Mr Salem said in a telephone interview.

Another Europe-Asia service that may be launched later this year is also likely to be routed via southern Africa.

The longer voyages help absorb extra tonnage that CMA CGM already has available in its fleet.

Other lines are re-routing some of their ships as well, although CMA CGM appears to be the first to consider a permanent deviation.

Maersk Line is diverting six sailings on its AE7 loop during and immediately after the Chinese new year period.

The voyage will take seven to 10 days longer than usual, with ships continuing to slow steam despite the recent slide in oil prices.

Avoiding the Suez Canal on the eastbound leg will save close to $700,000 in individual transit fees for the size of ship that Maersk Line is re-routing. The AE7 loop deploys the Emma Maersk and its sisters, the world"s biggest containerships.

The ship deviations are unrelated to the risk of piracy attacks off the coast of Somalia, with big containerships not thought to be vulnerable because of their greater speed and higher freeboard.

Even so, the additional saving in the form of lower insurance premiums is another bonus.

Analysing the benefits of sailing round Africa rather than through the Suez Canal, AXS-Alphaliner concluded that the move makes sense.

?Taking the detour via the Cape of Good Hope seems entirely justifiable in today"s slow market,? the firm stated in its latest newsletter while discounting the viability of a permanent shift.

?Round-Africa trips will certainly not become the rule ? they are the consequence of a conjunction of external factors that will make the CGH route viable for a limited period.?

Other carriers are considering their options.

Grand Alliance members said last night that, with Suez Canal fees now a high component of the overall voyage cost, the situation was under constant review ?although currently we have no immediate plans to change deployment of existing loops?.