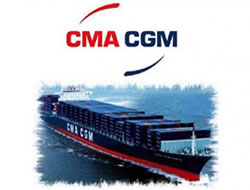 The CMA CGM Group is improving its ASAF service which will deploy 12 vessels of 5,700 containers (TEU) in direct service to West Africa starting May 9th thus becoming the first carrier with vessels of this capacity to call West Africa directly.

“With the 5, 700 containers (TEU) vessels calling West Africa in direct service, the CMA CGM Group confirms its ambition to reinforce its offer in the area and to support the economic development of the country,” the company said in a release.

The ER CANADA, the first 5,700 containers (TEU) vessel operated by the CMA CGM Group to call West Africa on the ASAF service, arrived at Walvis Bay (Namibia) on May 9th, and will proceed to Pointe Noire (Congo) on May 14th and Luanda (Angola) on May 17th.

The CMA CGM Group thus furthers its development in Africa where it is present since 2001, when the WAX trade was created – linking West Africa with China. Consolidated with the acquisition of DELMAS, the maritime transport expert in Africa, in 2006, the CMA CGM Group is now the leading transport in Africa.

“Already well-established in Africa, the Group aims at reinforcing its maritime services with the opening of new trades and calls, developing the creation and modernization of its ports infrastructures, extending its solutions for intermodal transport so as to deliver cargo inland and creating new logistic platforms offering a wide range of additional services to its customers,” the Group concluded.

This news is a total 1645 time has been read