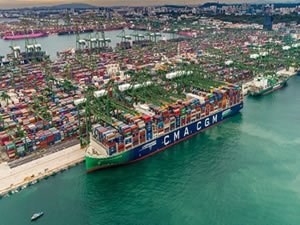 The container ship CMA CGM Jacques Saade, the world's first LNG-fueled Megamax-24, has set a new world record for the number of full containers aboard a single vessel.

When she departed Singapore on October 12, the vessel was carrying 20,723 TEU worth of cargo - about 10 percent below of her nominal maximum capacity of 23,112 TEU.

(As most boxes are two TEU in size, the value does not reflect the number of individual containers on board.)

The last world-record load was set in May when HMM Algeciras departed Yantian with 19,621 TEU of cargo on board. The Algeciras holds the current title of world's largest container ship, edging out CMA CGM Jacques Saade and MSC Gulsun with a nominal capacity of nearly 24,000 TEU.

The groundbreaking CMA CGM Jacques Saade was commissioned last month in Shanghai. Her name honors the company’s founder, Jacques Saade, a French-Lebanese businessman who founded Compagnie Maritime d’Affrètement (CMA) in 1978 and built it into the world's fourth-biggest ocean carrier.

CMA CGM's new vessels are the first ULCV-sized container ships powered by natural gas, and they are innovative in the use of space-saving membrane tanks rather than cylindrical tanks for fuel.

They are also among the largest LNG-fueled cargo vessels built by defense/civilian conglomerate China State Shipbuilding Corporation (CSSC), which is working to develop its LNG dual-fuel and LNG carrier business lines.

Due to many factors - wage differentials, policy measures, heavy subsidies, shipyard economies of scale and series size - the contract price per hull is substantially below the cost of the world's first LNG-powered container vessels, the American-built 3,000 TEU Marlin-class ships.

Accounting for inflation, each Jacques Saade-class vessel is about 25 percent less expensive for the buyer - though the ships are six and a half times larger by capacity.