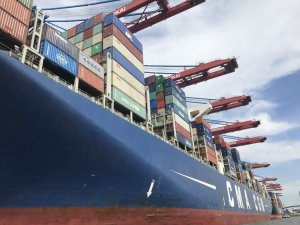 French container shipping major CMA CGM has chosen the port of Marseille-Fos for the bunkering of the company’s future 15,000 TEU LNG-powered vessels.

The choice of Marseille-Fos as a strategic hub in the Mediterranean for the supply of LNG was announced by Rodolphe Saadé, Chairman and Chief Executive Officer of the CMA CGM Group on the occasion of the French Maritime Economy Conference being held in Montpellier from December 3 to 4, 2019.

Earlier this year, CMA CGM ordered ten new 15,000 TEU containerships in China of which five will be powered with LNG. The LNG-fueled newbuilds will operate between Asia and the Mediterranean from 2021.

In 2017, CMA CGM became the first in the world to order LNG-powered 23,000 TEU boxships. The first of these, the CMA CGM Jacques Saade, was launched in September 2019 and will make an ‘exceptional’ call to Marseille in June 2020.

During the conference, Saadé also recommended that French President Emmanuel Macron initiate an international coalition for the energy transition of the transportation sector whose priority will be to develop a more competitive and less carbon-intensive energy source.

As informed, CMA CGM CEO stressed the need to improve the cooperation of all those working on near-term solutions to replace fossil fuels in the transportation and logistics sectors. The French President accepted to actively support this initiative, whose first forum may be held within the World Conservation Congress which will be organized in Marseille in June 2020.

Formalized during the French Maritime Economy Conference, the “Eco-Energetic Transition of the Maritime Sector” project, led by the French Maritime Cluster, the French Environment & Energy Management Agency (ADEME), Bureau Veritas and CMA CGM, is the first step towards this future international partnership. The aim is to carry out an inventory of available technologies and new developments in ship propulsion. The data collected will help guide and structure future work, according to CMA CGM.

What is more, during his speech, Saadé shared his vision of the future of the maritime industry, with a focus on logistics and digitalization. This year, CMA CGM completed the acquisition of logistics company CEVA Logistics, transferring its headquarters to Marseille. The group has also proceeded with its digital transformation and is carrying out numerous projects in the fields of blockchain, the Internet of Things (IoT) and artificial intelligence (AI).

This news is a total 567 time has been read
Tags: CMA CGM, Containership, LNG Bunkering, Port of Marseille Fos.