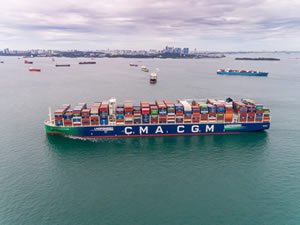 Group Chairman and CEO Rodolphe Saadé made the announcement at the opening session TPM 2021, a leading conference focussing on tranpacific liner shipping and logistics sector.

The six ships will have capacity of 15,000 TEU each and all will be powered by liquefied natural gas. CMA CGM says that by utilizing the vessels, it will be able to offer its American customers with the option to choose LNG as their preferred fuel.

The move comes as CMA CGM is in process building the world’s largest fleet of LNG-powered ultra-large containerships as part of its on-going mission to improve air quality and transition the shipping industry to more sustainable forms of energy.

CMA CGM has committed to becoming carbon neutral by 2050, in-line with targets planned by the International Maritime Organization. To meet the ambitious target, the company is exploring alternative solutions such as wind-assisted propulsion, hydrogen engines and other green fuels.  In 2019, CMA CGM became the first shipping company to successfully test a biofuel comprising 20% recycled plant oil and forestry waste, and it has pledged that alternative fuels will cover at least 10% of its consumption by 2023.

In November 2017, the company ordered nine 23,000 TEU containerships to be powered by LNG, becoming the first among its peers to order LNG-powered ships of that size. In total, CMA CGM is currently operating twelve LNG-powered containerships, including through subsidiaries, with plans to grow the fleet to 32 ships of various sizes by 2022.

CMA CGM says the first ships for the U.S. market will be delivered in October of this year and all six operational by the end of 2022. The ships will be deployed on the group’s Pearl River Express (PRX) line, which sails from China to the Port of Los Angeles.

For CMA CGM, the dedication of the six vessels is the latest commitment related to its U.S. operations. Earlier this month, the company announced plans to expand its U.S. headquarters in Norfolk, Virginia with the addition of 400 new jobs. It will also establish Arlington, Virginia as the home for its new start-up incubator and accelerator, known as ZEBOX, which Saadé founded.

“The deployment of 6 LNG-powered containerships of 15,000-TEU will go along with the development of the US economy in a sustainable manner,” said Saadé. “It is a strong signal in favor of the environment. The United States is strategic for the economic exchanges and for CMA CGM: 2021 will definitely be marked by the strengthening of the ties that have already united us for a long time. We deeply believe in the strengths of the American economy and we’re eager to foster its responsible growth.”