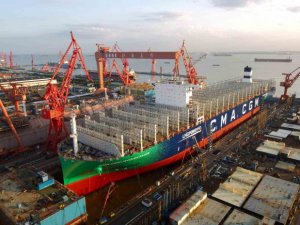 The French carrier described this award as an “important milestone” in its programme of the construction of green mega vessels, which are expected to show a 20% reduction in CO2 emissions and cause no fine particle pollution.

The certifications were given specifically to the engines of the newbuildings, WinGD X92DF dual-fuel engines, which are fitted onboard the CMA CGM Jacques Saadé – the company’s future flagship – and its eight 23,000TEU sisterships.

An award ceremony was held on 26 May by videoconference flanked by teams from CMA CGM ships, Rodolphe Saadé, chairman & CEO of the CMA CGM Group, took part in the live broadcast of the certification ceremony for the WinGD X92DF dual-fuel engine.

The Marseille-based shipping firm claims that the WinGD X92DF is the world’s most powerful two-stroke dual-fuel engine ever built, while at 63,840kW, it delivers power equal to 60 wind turbines.

The engine is built using the same approach as for those currently found on the French carrier’s series of 20,600TEU vessels (CMA CGM Antoine de Saint Exupéry, CMA CGM Jean Mermoz, CMA CGM Louis Blériot), according to CMA CGM, which claims that the only difference being that the new one will run on cleaner fuel. “Developing an engine that runs on gas required many internal engine modifications,” stated the company.

The CMA CGM Jacques Saadé will now be able to perform its LNG trials in the coming weeks. Earlier this month, the container ship successfully tested the connection with its fuel supply vessel, a ship specifically designed to bunker the group’s LNG-powered 23,000TEU vessels. CMA CGM said that mooring operations went smoothly, as did hooking up the barge to the CMA CGM Jacques Saadé.

This news is a total 304 time has been read
Tags: Bureau Veritas, CMA CGM