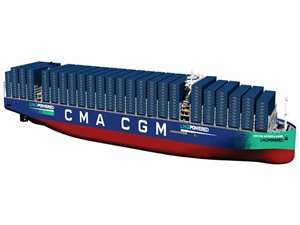 To use liquified natural gas (LNG) propulsion in newbuilds and conversions, the bunker fuel containment system needs to be selected. In LNG carriers, the choice is between integrated and independent tanks. The same choice applies to LNG propulsion, but additional factors such as the ship’s bunkering strategy impact the choice.

In September 2019, when CMA CGM Jacques Saade, one of the largest container ships built so far rolled out of Shanghai Jiangnan-Changxing Shipyard, it boasted not only new navigation and environmentally friendly features but also several trendsetting technological choices in container ship LNG propulsion. CMA CGM Jacques Saade and eight future sister ships feature integrated membrane tanks. These new vessels will join the Group’s fleet in 2020 on the French Asia Line (Asia-Northern Europe) and will be registered with the French International Register, confirming the Group’s commitment to operate under the French flag.

LNG is increasingly seen as a transitional fuel that offers a cleaner energy choice among current options. CMA CGM, for instance, says LNG helps to reduce SOx and fine particle emissions by 99%, NOx by up to 85% and CO2 emissions by nearly 20%.

The nine newbuilds will feature a tactical display offering enhanced map views for more dynamic navigation briefings; a path prediction system optimised to display the ship’s predicted position in the next three minutes; a smart eye system projecting a bird’s-eye view of the ship’s surrounding area; and augmented reality screens offering the crew precise information on the ship’s rate of rotation, distance from the wharf and transverse speeds. CMA CGM Jacques Saade will be equipped with a smart system to manage ventilation for the reefer containers carried in the hold.

The bulb has been seamlessly integrated into the hull profile and the bow is straight. The propeller and rudder blade have also been improved and a Becker Twisted Fin is used. CMA CGM Jacques Saade has been named after the founder of the group and will serve as CMA CGM’s future flagship.

In the case of LNG carriers, shipowners weigh several trade-offs while deciding on the tank containment system. Integral tanks are part of the hull structure and the containment and insulation are directly supported by the hull. These tanks do not have high load-bearing capabilities, which means they have limited ability to store boil off gas (BOG) under pressure.

Integrated tanks, since they take the shape of the hull, are highly space-saving. Membrane tanks are an example of integrated tanks.

Independent tanks are practically pressure vessels. They have better load-bearing capabilities which means they can store more boil off gas under pressure. Besides requiring additional support structures, they need to be shaped for load bearing. This makes them less space-saving.

CMA CGM Jacques Saade and its eight sister ships feature membrane bunker tanks supplied by a pioneer in membrane-type cargo tanks, Gaztransport & Technigaz (GTT). GTT vice president for LNG as Fuel Directorate Julien Bec explains that CMA CGM decided they would bunker only once every round trip – Europe-Asia, 25,000 nautical miles. This decision had an impact on the tank type.

CMA CGM recently announced it had accomplished SIMOPS bunkering at Rotterdam, which meant that bunkering took place during cargo operations, so the busy container ship’s schedule was not affected by bunkering requirements.

Explaining the bunker availability scenario, Mr Bec says there are presently five bunker barges/vessels of greater than 2,000 m3 capacity operating in Europe. One is in operation in the US. He adds that 15 more LNG bunker vessels have been ordered or are under construction including the largest, which is a 18,600 m3 barge from MOL. The Middle East may also see a bunker vessel soon, he says. “The main drivers are whether SIMOPS bunkering can be done; the price spread between bunkering LNG in Europe versus Asia, and the impact of the LNG system on cargo capacity,” said Mr Bec.

During bunkering, the incoming LNG must be cold enough, otherwise BOG production could ramp up, requiring operations to slow down. The requirement of only one bunkering every 25,000 nautical miles also means the bunker tanks must be large. Despite its large volume, a tank that is fully integrated to the ship structure can minimise the impact on loss of cargo capacity and deadweight. CMA CGM Jacques Saade has a single 18,600 m3 LNG tank with a width of 52 m. It is located below the accommodation block and reduces cargo capacity by some 300 TEU.

GTT’s Mark III containment system is being used in the CMA CGM mega container ships. The company has bagged contracts to supply its membrane tank to another five ships of 15,000 TEU that will roll out of Jiangnang shipyard. Each of these ships will have a bunker tank of 14,000 m3 capacity.

The Mark III system is composed of a primary corrugated stainless-steel membrane, positioned on top of prefabricated insulation panels. A secondary membrane is made of composite material.

This modular system employs standard prefabricated components that can accommodate the shapes and capacities of tanks. They are designed for mass production techniques and easy assembly. Its latest development, Mark III Flex+, offers a guaranteed boil-off rate of 0.07% V/day with an insulation thickness of 480 mm. CMA CGM Jacques Saade’s tank has an insulation thickness of 270 mm, 100 mm primary and 170 mm secondary, and is rated at 700 mbarg.

Unlike in an LNG carrier, the bunker tank in CMA CGM Jacques Saade has no filling limitation, so the tank needs to function at any filling level. Specific container seakeeping was another design challenge. Some of the innovations introduced in the bunker tank to overcome these challenges include increasing the foam density to 210 kg/m3, aluminium wedges and large chamfers on the top and bottom. Local sloshing loads could be high, so the large bunker tank distributes the high- and low-density polyurethane foam with the 210 kg/m3-thick foam specifically developed for these applications. In LNG carriers, 130 kg/m3 foam density is the norm.

The main engine in CMA CGM Jacques Saade is a WinGD X92DF two-stroke engine with an output of 63,840 kW at 80 rpm. The system has been designed so the natural boil off can power hotel loads, such as in port stays or anchorage, through BOG compressors, while during sailing a vaporiser-pump combination is used. “Fully loaded steaming would need 6 tonnes/hour of gas whereas the natural boil off rate is 800 kg/hour. The design is such that there is no need for an onboard reliquefaction plant,” says Mr Bec. The gas is supplied to the main engine at 17 bar and the auxiliary engines at 6 bars. A dual-fuel boiler unit can be used in an emergency.

In the case of a 23,000-TEU ship, delivery happens nearly 20 months after steel cutting. Mr Bec says the entire sequence of membrane tank installation can be managed in eight months, fully off the critical path. The three steps in the sequence are: constructing the tank block at the quay or in the drydock, assembly in drydock and tank completion at quay. Mr Bec also mentions the importance of training the crew since they are typically cargo ship crew, whereas LNG operation requires specialised knowledge.

A case for independent tanks

Suppliers of independent tanks argue that their products offer more benefits. TGE Marine Gas Engineering sales engineer Max Liese says TGE Marine’s independent tanks of Type C are pressure vessels that have a design pressure of 4 bars. “The operational pressure is 3.6 bars. This means the pressure can build up to 3.6 bars before any action such as starting the BOG compressors needs to be taken,” he adds.

“It is quite possible that the incoming LNG is not super cold. The temperature could be more than -160°C. Or the hose could be long and while passing it the temperature may climb up. So the fresh, hotter LNG coming in can create more gas. Since ours is a pressure vessel, it can handle the pressure build-up due to higher BOG rates, says Mr Liese.

Pressure vessels offer flexibility and smoothness in bunkering, he adds. There is no need for a vapour return compressor for the Type C. “In some cases, you may need to spray cool the tank. In our Type C tank, you can start bunkering from the top of the tank and allow for spray cooling,” he says.

He cites TGE Marine’s newly introduced tri-lobe tank design that can fit into one container bay of a medium or large container vessel. Three cylindrical sections are designed in a horizontal transversal arrangement to form three lobes. The design targets an increase in volumetric efficiency while maintaining the advantages of the Type C tank – pressure holding ability and ease of operation. Up to 7,000-m3 capacity tanks can be offered through this design. The tank can be prefabricated and delivered to the conversion shipyard ready for installation. “We can provide intelligent tank set-up concepts to reduce the loss of cargo space,” he says, adding that the company sees a long-term market in LNG conversions as a result of the sulphur cap.

This news is a total 1681 time has been read
Tags: CONTAINER SHIPPING & TRADE, CONTAINER SHIPS, FUELS & LUBRICANTS, LNG AS A FUEL