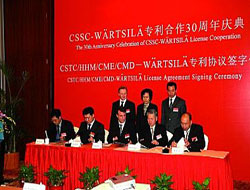 Wärtsilä and Chinese CSSC-MES Diesel Co Ltd (CMD) have jointly signed a licence agreement for the manufacture and sale of Wärtsilä low-speed marine diesel engines by CMD in China. The agreement grants CMD the right to manufacture all sizes of Wärtsilä RTA and RT-flex modern low-speed engine types at its factory in Shanghai. However, CMD will focus on engines of 60 cm cylinder bore and larger.

The new licence agreement with CMD will enable a significant contribution to the delivery of Wärtsilä low-speed marine engines to the shipbuilding industry in China. The agreement also reinforces the partnership between Wärtsilä and CSSC (China State Shipbuilding Corporation) through Wärtsilä"s existing licensees Hudong Heavy Machinery Co Ltd and Zhenjiang CME Co Ltd which are both members of the CSSC group.

?This year Wärtsilä and CSSC are celebrating their 30-year business partnership. Wärtsilä looks forward to further developing this relationship with CMD and to increasing the market share for Wärtsilä common-rail low-speed engines in a long-lasting fruitful partnership,? said Mr Martin Wernli.

CMD was established in 2006 as a joint venture of China State Shipbuilding Corporation, China CSSC Holdings Ltd, and Mitsui Engineering & Shipbuilding Co Ltd with its factory in Shanghai Lingang heavy equipment production area, close to major shipyards. It is already a major builder of low-speed marine engines. In 2008, the company expects to have built engines with an aggregate power of 960 MW (1.3 million bhp). It has a target of an annual production by 2011 of more than 100 engines amounting to more than 2200 MW (3.0 million bhp).

This news is a total 722 time has been read